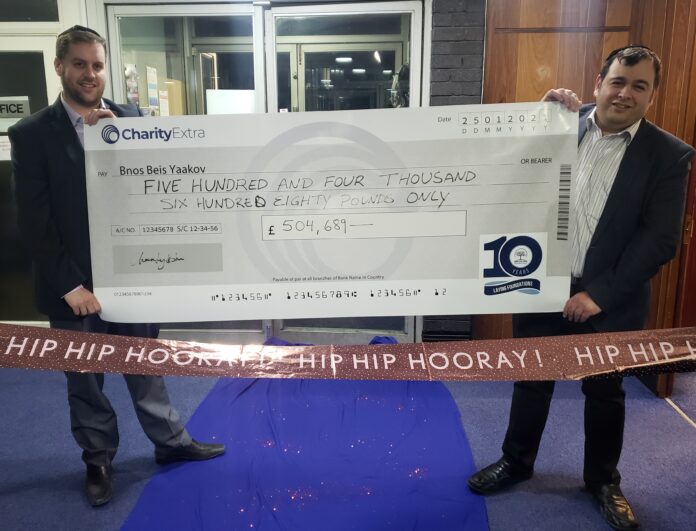 Bnos Beis Yaakov (BBY) Primary School undertook to raise £500,000 in just 36 hours. Not only did they achieve this goal, but people also continued giving after the campaign ended, and BBY have managed to raise almost £520,000.

Despite concerns regarding the campaign falling in the midst of this current pandemic, BBY still managed to raise this astounding amount.

The campaign was organised as BBY has flourished to such an extent since opening its doors 10 years ago, that funds were needed to accommodate the growing interest in the school.

BBY’s aim is to expand and improve their newly-acquired site, by building a dining hall, a fully-equipped gymnasium, an IT suite, a SEN suite and a library.

The BBY campaign was more than just a fundraising campaign. It turned out to be a project of incredible Achdus. Each BBY parent approached this campaign with great enthusiasm, determined to help reach the shared goal. The passion exhibited through the sheer effort from so many parents reflects the tremendous level of satisfaction which BBY parents have with the school.

However, this feeling of Achdus seemed to spread wider than just the parent body. Such an overwhelming amount of North West London seemed to be swept up into the excitement of BBY’s campaign. There was a large number of donors who gave to multiple teams; not satisfied with ‘having done their bit’, they wanted to give more.

Many teams increased their target goal mid campaign due to the amazing success with so many willing and generous donors. Additionally, many donations were received from donors passing on team links to their friends. This further exemplifies the level of communal togetherness for the success of this campaign.

Furthermore, donations continued pouring in well after the official end of the campaign. In the words of one such donor, which so perfectly echoes the sentiments of many;

“I wanted a chelek in this.”

“ I have rarely seen a campaign where the majority of teams worked so hard; this shows there is a lot Achdus in your school.”

The chairman of the Board of Governors, Mr Zvi Sobel, on behalf of BBY wants to extend the deepest and warmest thank you to Mr BE Perl MBE along with all the other matchers without whom this campaign would have never began.

A special thanks to Eli Tamir, one of the governors of the school and a renowned international singer. He used his extensive event planning skills to flawlessly lead the campaign team from the top, overseeing all planning and logistics in advance and directing communications on the day. Mr Tamir is slowly gaining a reputation as a director of fundraising campaigns across the kehilla.

He would also like to thank all teams who were on the front line raising the money for this project.

Last but not least he would like to thank every single one of the more than 4200 donors who have helped this to be such a huge success.

With this new legacy soon to be in place we can ensure that there will be sufficient places for the kehila’s ever growing demand.

Each donor has not only supported a school that has earned itself a sterling reputation by producing wonderful talmidos, but has been a part of something bigger. Every donation has a part in building a school which is projected to change the future of the NW London Kehilla.

How can a great school become even greater? Watch this space!