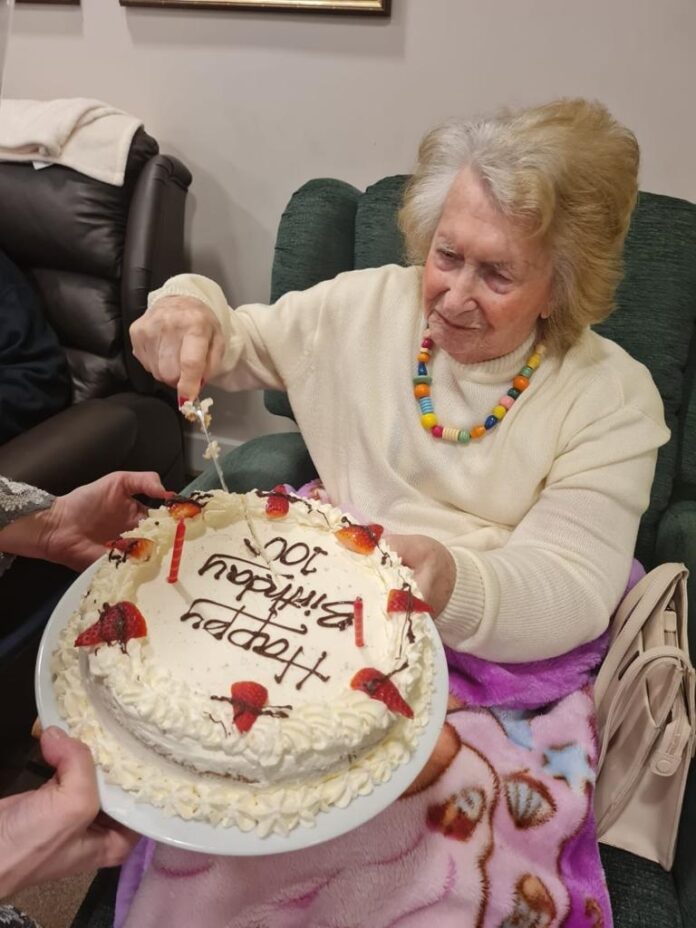 Dr Rosa Rivlin who worked for most of her life as a GP, celebrated the milestone of reaching 100 on 7 February with her family on a Zoom. Her family, including her two children, six grandchildren and 22 great-grandchildren who live in the UK, Canada and the US, made her a film with birthday messages and songs to play at the celebration at Jewish Care’s Anita Dorfman House at Sandringham.

At the party, social co-ordinator, Mihaela Danaila, who was previously a professional singer and regularly performs to the residents in gowns, reminiscent of times past when the older generation dressed up to go out, sang Shalom Aleichem and We’ll Meet Again. Rosa joined in, together with the staff and residents, who also joined her to celebrate with cake, candles and a card from the Queen. Rosa’s daughter and granddaughter also saw her for a socially distanced pod visit on the day.

Rosa grew up in West Hampstead. Her parents, who came from Poland, were a tailor and seamstress. Two of her three siblings went into medicine and her long career began when she also decided to study medicine during World War II and discovered that all the medical schools had been evacuated. She took a place in Cardiff at the Welsh National School of Medicine, where she was one of only six women on a course of 60 medical students. It was there she met her husband, Max Rivlin, whose mother invited the medical students to Friday night dinners. They were engaged the day Rosa qualified, in 1947.

Rosa’s first job was at Hammersmith Hospital and was attached to the Radiotherapy department where she saw the country’s first renal dialysis machine. After 6 months in London, Rosa returned to Cardiff where she and Max were married and shared 51 happy years together.

Dr Rivlin spent most of her career working in General Practice where she was the senior Partner for 19 of the 31 years that she worked in the Practice. Rosa greatly enjoyed her work and had a special interest in public health, co-authoring several published research papers. Rosa retired from the Practice in 1989 and she and Max moved to Northwood to be closer to their children, where she continued to work on a part-time basis as a locum GP in practices in Edgware, Hatch End and Stanmore.

Success has not been limited to Rosa’s family and career, she and Max, who sadly passed away in 1999, were Bridge and kalooki champions and won many trophies together. She was also Chair of the Cardiff Aid to Israel group in her spare time she fundraised for them and greatly enjoyed visiting Israel.

Rosa’s family said, “We are absolutely delighted with the care and attention she is receiving at Anita Dorfman House. The party was so lovely and all the family commented how special it felt. They really did a great job with the celebrations.”