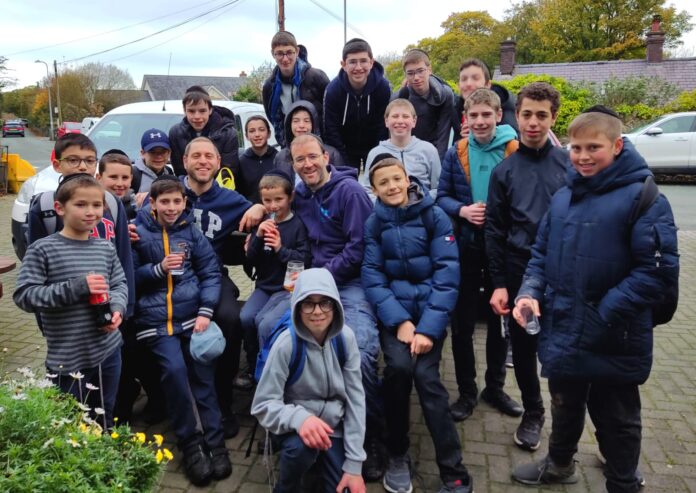 The High School boys from Beis Yisroel Shul, Manchester, enjoyed an amazing Shabbos Hisachdus with the Rov, Rabbi Yehoshua Ahron Sofer shlita, accompanied with Rabbi Yaakov Hibert and Reb Gershon Rose. On Thursday evening everyone arrived at Mountain View Hotel in Wales. Friday morning had a nice early start with Shacharis and a fantastic hike in the mountains with Rabbi Hibert and R’ Rose.

Kabbolas Shabbos was beautifully led by Ari Spielman. The Rov spoke a few times over Shabbos along the theme of Ain hadover talui eleh be – it is all up to me. Everyone has the power within themselves to be a great person and mitzvos are always a challenge which you can rise to the occasion to fulfil them. This is why the water rose for Rifka when she initially came to the well however when she was doing a mitzvah of chessed giving Eliezer and the camels to drink, the possuk says she had to draw the water from the well. According to effort is the reward, no pain – no gain.

There was a lavish Friday night seuda and during the seuda Zevi Dolties and Benji Rose said lovely Divrei Torah. Lively zemiros and a song competition was enjoyed by all the boys. Benching was auctioned off for Mishnayos to be learnt and was bought by Zvi Lewin and Moshe Rose. After the meal, the boys went for a walk by the beach with the Rov. Later on there was an Oneg with plenty of refreshments with cholent and a thought provoking discussion.

Zevi Doltes was the chazzan for Shabbos shacharis and Ari Spielman for Mussaf. Dovi Bakst, Ari Katz, Eli Katz and Eli Rose leined the parsha with Zvi Lewin as the Gabbai. Davening was followed by a nice Kiddush. At Shabbos lunch, Yizti Emanuel said a Dvar Torah he beautifully prepared and benching was again auctioned off for Mishnayos which was bought by Zevi Jacobson and Benji Rose. Avi Weissbraun davened Mincha for the amud, followed by seuda Shlishis where there was a yediah kelolis quiz.

On Motzai Shabbos, many fathers joined the boys for a fire and kumzisits at the beach. Then there was an activity with the fathers and sons which was great bonding time which was followed by a bbq melava Malka. The boys enjoyed the Shabbos so much that they were asking the shul provides a Shabbos hisachdus once a month. As the boys have half term holidays the shul arranged a late shacharis, breakfast and learning programme by Reb Suchie Bengio. Special thanks go to Yisroel Meir Halter, Yehuda Fagleman and Chaim Emanuel for all their help in arranging the weekend away and a big thank you to Rabbi and Mrs Hibert for running the kitchen and activities.