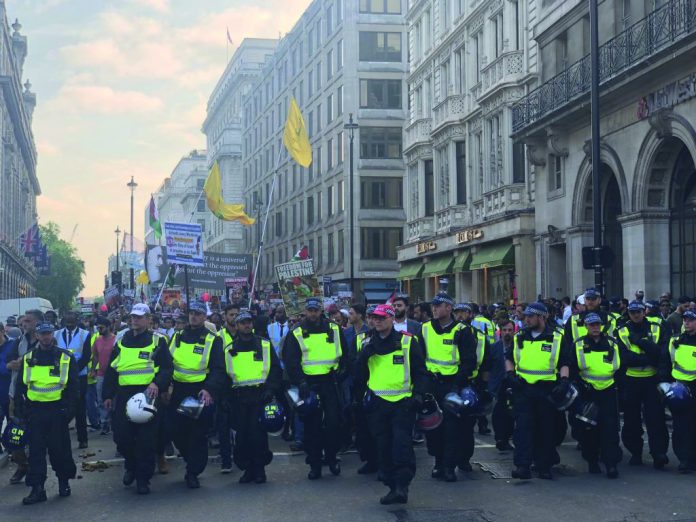 Around 1,600 anti-Israel protesters attended a demonstration in central London calling for the obliteration of Israel at the annual Al-Quds rally on Saturday.

Shaykh Mohammad Saeed Bahmanpour addressed the crowd telling pro-Palestinian followers that Israel should be wiped from the map and Zionists’ days were numbered.

Hezbollah flags flew once again despite 13,000 people signing a petition imploring Home Secretary Sajid Javid to ban all aspects of the Lebanon-based political party and militia.

Protesters unashamedly waved the controversial flag, which is allowed if they support only the ‘political’ wing in spite of calls from London Mayor Sadiq Khan for the Home Office to proscribe both wings.

“We should not have to be here on the streets of London protesting against a terrorist flag,” Hendon MP Matthew Offord reportedly said.

“We hear there are two wings to Hezbollah, the political wing and the military wing. There is not.”

The Campaign Against Anti-Semitism petition states that Hezbollah was “a genocidal anti-Semitic terrorist organisation” whose Deputy-General has mocked the distinction between its ‘political’ and ‘armed’ wings.

The Home Office notes Hezbollah is committed to the ‘armed resistance’ to the State of Israel and aims to seize all Palestinian territories and Jerusalem from Israel.

Arguably the most noteworthy sight was Jewish lawyer Mark Lewis singlehandedly halting the rally for nearly an hour by refusing to move his wheelchair.

Police moved on other pro-Israel protesters as Mark made his stand alongside partner Mandy.

“I was ready for violence,” he reportedly told Israel News Agency.

Demonstrators gathered outside the Saudi Arabian embassy prior to their march towards Downing Street but were unable to progress after Mark, who suffers from multiple sclerosis, refused to budge.

The lawyer attended the rally with the UK branch of the Herut political party, a right-wing Zionist party founded by Menachem Begin.

“I take exception with the Hezbollah flags and the inflammatory speeches calling for the destruction of a country,” he reportedly said.

“Hopefully we got the message across. Enough is enough – we need to ban terrorists marching through our streets. 2018 has to be the last year, otherwise there will be an even bigger counter-protest next year.”

Mark, 53, a respected lawyer from high profile cases, has also featured in a documentary at Hadassah Ein Kerem Hospital in Jerusalem on Channel 4 and has been the subject of articles globally.

“There is no obvious reason why the UK government hasn’t proscribed Hezbollah,” Lewis reportedly added.

“The Foreign Office is notoriously anti-Israel and has a blind spot where Hezbollah is concerned splitting it into a “terrorist wing” and a “political wing”.

Though his stand was not planned until a Police Support Officer eventually moved him on, he has received plaudits for his actions.

Ugly clashes did take place between counter-demonstrators and far-right nationalists.

There were cheers when Ali urged supporters to thank Jewish people, including Orthodox Neturei Karta sect members, who attended the rally.

Amongst disturbing images on social media Christians United for Israel posted: ‘Shocking hatred on display as a Neturei Karta member burned the Israel flag accompanied by chants of “Free, Free Palestine” and “Down, down Israel”.

Counter-demonstrators played the Israel’s national anthem on speakers and the recent Eurovision-winning entry.