It is the yartzeit of the Lubavitcher Rebbe next week. As a Lubavitch Rabbi I wonder if you could share what you think would be his response to the current global crisis. What with all the restrictions in Jewish life at the moment – no shul – no school – I just wonder what the mission would be? I know it is mere speculation but I am assuming something can be gleamed from past teachings. In anticipation,

As you rightly observe it remains eminently speculative and it is not for me to speak in anyone else’s name, let alone someone as great as the Lubavitcher Rebbe. However, when assuming his mantle of leadership in 1950, the Rebbe, who escaped war torn Europe, confronted the inevitable problem the Jewish world in a post Holocaust-era was facing. Many despaired, believing the world was a dangerous place to live. The Rebbe maintained that the world we desire is inherently good. The ability to see beauty in the world, insisted the Rebbe, is the beginning of our moral sensibility.

He also believed in the intrinsic value of every human being who is “formed in the image of his Creator.” Thus, what one might typically perceive as character shortcomings, the Rebbe saw as opportunities to maximise potential.

To that end, in the Rebbe’s worldview, every obstacle opens doors; every challenge enables us to expose latent potential. Every darkness is a prelude to a new dawn.

If there is one catchphrase that is being bantered about at present – it is “new normal.” We are emerging from our collective lockdown and entering into a “new normal.” What does that really mean and how does that translate into our lives as Jews?

These past few months have engendered a paradigm shift in civilisation. We have all suddenly become acutely aware of our vulnerability; we have all come to recognise that no matter how powerful, how influential, how rich, how incredible you think you are – it is not about you. Rather, there is Someone in charge in this world. All of a sudden we are thrust into this whole new set of circumstances where we find ourselves operating on a different level in awareness of the fact that we are not in control.

The Rebbe always stressed that any and every advancement in our world can be and is intended to be utilised for spiritual purpose. Hence for so many years many of his public addresses were broadcast on Television. For so many years the internet became a new vehicle through which to reach out to tens of thousands of Jews. And it is fair to say, that on account of the advancement of technology, more Jews have been touched, engaged, impacted during these past few months than probably ever before. Where previously we engaged physically, the virtual reality has created vast new opportunity. We have been connecting in ways like never before. “Don’t see obstacles as stumbling blocks but as stepping stones.” That is the Rebbe’s enduring message in these sorts of predicaments.

There was a man who once came to the Rebbe and expressed his exasperation at his workload. Between being a principle of a day school, a regular columnist and writer for various publications, a sought after speaker etc. he simply asked the Rebbe: “Something has to give. Which should I give up?”

The Rebbe pondered a few moments then said to him: “I would like you to undertake directing Chabad activities in your city.” You can well imagine the man’s alarm. Not only did the Rebbe tell him where he ought to ease up, but just like that handed up a new task! And he expressed his dismay to the Rebbe.

We are each put into this world because there is something we can do that no one else can do which is why we are here in the first instance. And when you understand that it is not “me” but Someone else who is in charge – and you commit yourself to that awareness, then you are able to literally recreate yourself, redefine your personality and discover the latent potential within.

We know that darkness is just a prelude to new light. New Normal – on the one hand, as per what Maimonides describes there will be an era when initially the world will carry on as normal – but it will be with a new light – the radiance of redemption and a new reality – the arrival of Moshiach. That remains our enduring mission and ultimate dream. 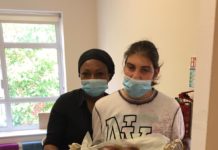