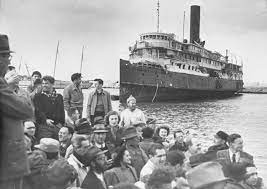 One of the last surviving members of the Irgun organisation has passed away.

Yaacov Aharoni, 101, was led by Menachem Begin before the establishment of the State of Israel.

“I was saddened to hear of his death and felt great pain,” he said. “Despite the many difficulties he endured, the independent State of Israel was his reward.”

Michal Aharoni, one his five children, said her father was a “hero” who risked his life as he loved his country.

According to the Betar Zionist Youth Movement, Aharoni blew a shofar at the Western Wall during the British Mandate and set up special units in the Etzel.

Born in Jerusalem in 1921, Aharoni joined the Irgun in 1938 and took part in many operations against the Arab.

British Mandate forces regarded the Irgun as a terror organisation and sentenced Aharoni to exile in Africa. When Israel was established Aharoni trained recruits in the IDF’s Artillery Corps.

He went on to study at Tel Aviv University, graduated in Bible studies and worked in education.