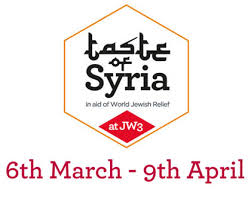 Fundraising and food go almost hand in hand. So a pop-up restaurant where part of every diner’s bill goes to charity combines the two very well.

The result is Taste of Syria, a plastic, transparent dome sitting in a paved area in front of the JW3 building, specialising in typically Syrian food. It is also the first time a milky restaurant – JW3’s Zest – has also been granted a meat licence on the same premises, in this case by the Sephardi Kashrut Authority.

When WJR launched an appeal for funds to help Syrian refugees in December, 2015, the community responded in amazing fashion, raising more than £1 million.

But, as WJR chief executive Paul Anticoni told diners gathered for the official launch of the pop-up last week, the refugee crisis has continued, and therefore so must the fundraising.

Mr Anticoni pointed to the schemes WJR has set up – a unique employment programme to help 1,000 Syrian refugees in Britain, the charity’s first project here, and a women’s support centre in Turkey.

“The amount we raised was a remarkable response from the community. There was a real resonance within our community about ‘we were in that situation not so many years ago and we know what it’s like to not to have a safe place to live and to not know where one’s future is.’ I was absolutely bowled over not just by the financial support but by the hundreds of offers of assistance from people saying my house is open to anyone who wants to stay. I felt guilty at times that we couldn’t give enough members of our community something more tangible to do,” said Mr Anticoni.

“There is a recognition a of long-standing humanitarian aid system designed for a world where conflicts were between states; people were in camps for a short time and then went home. That is no longer the case.

“If you ask any refugee what they most want, most of them will say I just want to go home. The options to stay where they are very limited.

“People are displaced because of civil and internal conflict, for long periods of time, not into refugee camps. They are probably pretty unlikely to go home. Some of those would best settled in rich countries, but the majority need a dramatic level of support to stay where they are in poorer countries that can’t afford to keep them.

“If the world doesn’t do something today, the situation will only get worse. The situation has not gone away and there are a lot bigger problems to come in the future,” he concluded.

The restaurant seats up to 40 people and will be at JW3 until April 9. Details are on JW3’s website.