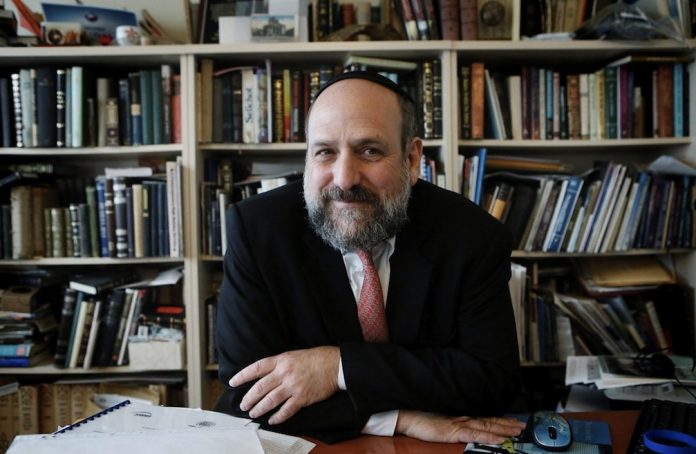 Poland’s Chief Rabbi Michael Schudrich is battling to amend an ‘animal rights’ bill being considered by Parliament that would impact on Jewish communities around Europe
If passed it will restrict kosher slaughter with offenders facing up to four-year jail terms.
Speaking in Haaretz, Schudrich confirmed he was in “advanced discussions” with members of Parliament proposing the bill to be “more sensitive” to Jewish requirements.
“There is a real openness, also among the animal rights people, to find a compromise that will not negatively impact Jewish religious life,” he said.
Poland’s government has not publicly announced ‘kashrut’ restrictions but is planning on debating the bill which would impact Jewish communities in Europe.
The proposed bill doesn’t directly specify religion but Chief Rabbi Schudrich noted it protects animal rights. A Jewish community in Poland can slaughter animals in a kosher way but slaughtered products cannot be exported to European countries.
Clarifying this point, European Jewish Congress (EJC) chairman, Rabbi Menachem Margolin, confirmed this week that if the bill passes Parliament Jewish communities in Europe dependent on kosher meat imported from Poland would be affected.
Poland’s Constitutional Court overturned a Polish parliament attempt to forbid kosher slaughter on grounds of ‘freedom of religion’ in 2014.
And Rabbi Margolin has appealed to the Israeli Government to lobby other governments.
Worryingly though, the ‘animal rights’ bill is another controversial Polish law just days after Polish President Andrzej Duda sanctioned a Holocaust Bill imposing up to three years in jail on those suggesting Poland was complicit in the Shoah.
The EJC has instigated legal proceedings to Poland’s Constitutional Court against the Holocaust Bill.
Rabbi Margolin labeled the bill “delusional” and called on President Duda to hold back ratifying the legislation until meeting Jewish leaders.
A judicial review by the Constitutional Court can rule an amendment to the bill.
Israeli politicians and Jewish organisations slammed the proposal in no uncertain terms.
Poland’s Chief Rabbi reportedly told CNN the Holocaust law caused confusion this week.
“We are hearing many more distortions of facts than we heard two weeks ago,” EJC reported.
“The way the law was written and presented failed to meet its goal and that’s something we are going to have to work on.”
“My sense is that no one anticipated this strength of a negative response,” he added.
“Part of it clearly is that for many Poles it’s been too painful and too long to hear expressions like ‘Polish Death Camp’ it’s blaming them for something they didn’t do.
“One of the most horrible places on the earth Auschwitz – you can understand it that if you didn’t do it and are being blamed for it, that’s upsetting. So I understand that. However the way the law has been written, the way it had been explained to the public, was done clearly in an insufficient manner.”
Rabbi Margolin has called on the Polish Jewish community and government to communicate.
“What has been heartbreaking over the last 10 days is how people have been talking at each other,” EJC reported.
“Clearly this law was supposed to be about education, to educate the world what the Poles did and didn’t do during World War II, what they were complicit of and weren’t complicit of. It’s education and as we could see the goal of education has not been met. The opposite has happened.”
Widening the debate, Ha’aretz reported that German Chancellor Angela Merkel refused to comment on the proposed Holocaust Bill in her weekly video podcast.
“Without intervening directly in the legislation in Poland, I would like to say very clearly only the following, here as German Chancellor,” she said. “We are responsible as Germans for the things that happened during the Holocaust, the Shoah, during National Socialism and this responsibility will be upheld by every federal government, which is why we will continue to promote the memorial sites in Kreisau and Auschwitz in the future.
“We also want to show young people from Germany how they are doing. It is only on this basis that we can shape a good and common future with Poland, but also throughout Europe and in the world.”
The German leader was responding to a question from a student on freedom of expression.
Israel noted the law would curb free speech, criminalise basic historical facts and stop discussion of the role some Poles played in Nazi crimes. (JPost)
A Polish government spokeswoman welcomed Merkel’s remarks, PAP news agency reported.

His Royal Highness Prince Philip has passed away

His Royal Highness Prince Philip has passed away