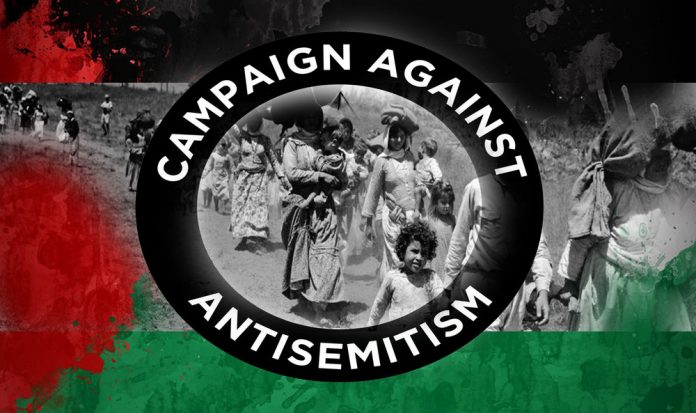 The Campaign Against Antisemitism is taking legal advice after the Crown Prosecution Service blocked a private prosecution of the leader of the annual “Al Quds Day” pro-Hezballah parade in Central London.

The case was due to be heard next week.

In 2017 Nazim Ali enraged Jewish organisations with vitriolic comments including, “Some of the biggest corporations who are supporting the Conservative Party are Zionists” and ‘From the river to the sea, Palestine will be free.”

The parade is notorious for demonstrators marching in support of the terrorist organisation, which seeks to murder Jews worldwide.

“This decision by the CPS is an appalling betrayal of British Jews,” Gideon Falter, CAA chairman told The Jewish Weekly.

“We are now taking advice on using judicial review proceedings to force the CPS to either prosecute Mr Ali itself or let us get on with the job.

“We have called for zero tolerance enforcement of the law against anti-Semitism and that is what politicians have promised, but it seems that the CPS is not only abandoning British Jews, it is intent on actively intervening to block us when we stand up for ourselves.

“Whilst we prepare to take action in the courts, the Attorney General must urgently investigate the behaviour of the CPS and its horrifying resistance to prosecuting anti-Semites.”

CPS declined to prosecute Ali last year, which is why CAA launched a private prosecution.

“Not only did CPS refuse to do its job and uphold the law by prosecuting Mr Ali, now it is blocking CAA from doing so privately,” a CAA spokesman noted.

“CPS has done this by using its statutory power to take over our private prosecution and then discontinue it.

“Despite prosecuting many thousands of hate crimes each year, CPS has not yet been known to conduct more than two dozen prosecutions of anti-Semitic hate crimes in any year.”

And there were cheers when he urged supporters to thank Jewish people, including Orthodox Neturei Karta sect members, who attended the rally.

Shaykh Mohammad Saeed Bahmanpour told pro-Palestinian followers Israel should be wiped from the map and Zionists’ days were numbered.

The controversial flag is allowed if support is only for the ‘political’ wing.