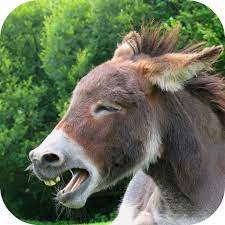 A lot was at stake. We were perched to enter the promised land, launch Jewish history, and assemble the kingdom of God. Only two men stood in our way: a renowned but eccentric wizard and a frightened but determined king, colluded to cancel our date with destiny. The Bilam saga is an epic tale of Jewish history, human prophecy and divine providence. Everything is at stake in this crucial and suspenseful faceoff between sorcery and faith. This is all a very serious issue.

Except, of course, for one absurdly hilarious conversation between a distinguished prophet and his chatty donkey. This slapstick exchange between man and mule certainly breaks the ice and provides some comic relief. Additionally, this dialogue between Bilam and the beast is satiric: a presumptuous prophet who “observes the future”, could not even match the sight of his own donkey. Bilam, an eloquent orator is silenced by a moral lecture from his smooth-tongued donkey. All of Bilam’s preconceptions come crashing down. Humiliated, he realizes that his prophetic powers and his rhetorical skills are each divinely delivered. The great and famous Bilam will only see what Hashem allows him to, and can only speak the word of God.

Yet there is an additional message, beyond the obvious. The donkey episode doesn’t just mock Bilam it also instructs him. The talking donkey is a warning flare, signaling that his scheme will fail. Bilam walks away from donkey-gate with humility, but he should also have recognized his own futility in confronting the Jewish nation.

Bilam was a wise historian who scrutinized the past and examined the future. How was he so easily duped into this folly? Hadn’t Hashem performed countless miracles for us during our departure from Egypt, and throughout our desert journey? How did Bilam believe he could defeat a people who had proven invulnerable to tyrants and immune to the harsh desert? What was he thinking?

Bilam wasn’t mad. He conceded that Hashem had selected the Jewish people and had paved a supernatural path of miracles through the

desert. However, those dusty miracles occurred over thirty-eight years earlier, to a different generation and at a very different stage of history. A lot of desert sand separated those heady days of joy from the current struggles of a new generation looking for doorway to enter the land of Israel. Bilam wagered that the Jews were no longer chosen. After maddening betrayals and infuriating mutinies, Hashem had discarded us, condemning us to nomadic wandering and to silent death. Currently, the Jews were just like “any other nation, and could be defeated. Bilam was the first Christian, the first to declare Hashem’s abandonment of the Jews. Maybe, the chosen people had become un-chosen and were now susceptible to his supernatural spell.

Bilam was desperate to detect even a hint of divine fury. He searched for any “daylight” between Hashem and His people, to verify his assumptions and launch his attack. Any slight decline in the love between Hashem and His people would have corroborated his audacious belief that Hashem no longer chose our nation. Despite Bilam’s best efforts, he could not detect any dissonance: “He did not discern iniquity in Ya’akov nor did He detect perversion in Yisrael”. Recognizing the eternal divine love, which was immune to human failure, Bilam capitulated: how shall I curse, whom God has not cursed?”. Once he realized that Hashem hadn’t abandoned His chosen people, Bilam surrenders.

Had he only listened to his knowledgeable donkey, Bilam might have saved himself time and heartache. His hapless donkey was having an off day. It had wandered off course, crushed Bilam’s leg and, finally, collapsed from exhaustion. This four-legged “professor” then tutored Bilam about the trait of loyalty. After years of loyal service, a trusted donkey deserved compassion and forbearance, not rage and violence.

may have occasionally collapsed into a state of panicked indifference, but Hashem remained loyal to His covenant. The bonds of loyalty welded us to Hashem, and we remained invincible. Bilam’s gamble failed.

Had Bilam only listened to his donkey and appreciated the value of loyalty, he would have suspended his plans to attack us earlier. He didn’t fully appreciate the bonds of loyalty between us and Hashem.

A Crisis of loyalty

Loyalty sits at the core of any long-term relationship. Every relationship has high points and low points, moments of harmony and moments of frustration and even betrayal. Loyalty reinforces our relationships, allowing them to outlast disappointment and frustration. Without allegiance and trust, relationships are brittle. Relationships of loyalty are always built to last.

We live in a dizzying world of rapid change and constant movement. We ricochet from “situation to situation” too quickly to establish bonds of loyalty. Students often seek my professional guidance. Recently I have declined, because any professional advice I offer is obsolete. The job market of 2022 has completely shifted from where it was twenty years ago. In the past, employment choices were major life decisions. Today the average span of employment is only four years. People hardly meet their co-workers and employers before they move on. Zoom isn’t helping matters.

The average length of a marriage is only slightly longer, lasting eight years. Friendships have shifted from personal interactions to virtual reality, making them less adhesive. It is much easier to unfriend someone on Facebook or ghost them on whatsapp, than it is to discontinue an actual friendship. Without long-term marriage, long-term employment, and actual live friendships, loyalty fades.

As actual loyalty begins to wither, modern culture offers artificial replacements. Corporations convert financial transactions into “emotional experiences” to generate customer loyalty and insure greater profit. Airlines incentivize our travel with extra perks to assure flyer’s loyalty. We invest our loyalties in sports teams, celebrities and clothing brands. All of these hollow loyalties target either objects or faceless organizations, rather than actual people. None of them teach us about real relationships or about devotion to others.

The donkey speaks to us all. He calls us to greater loyalty