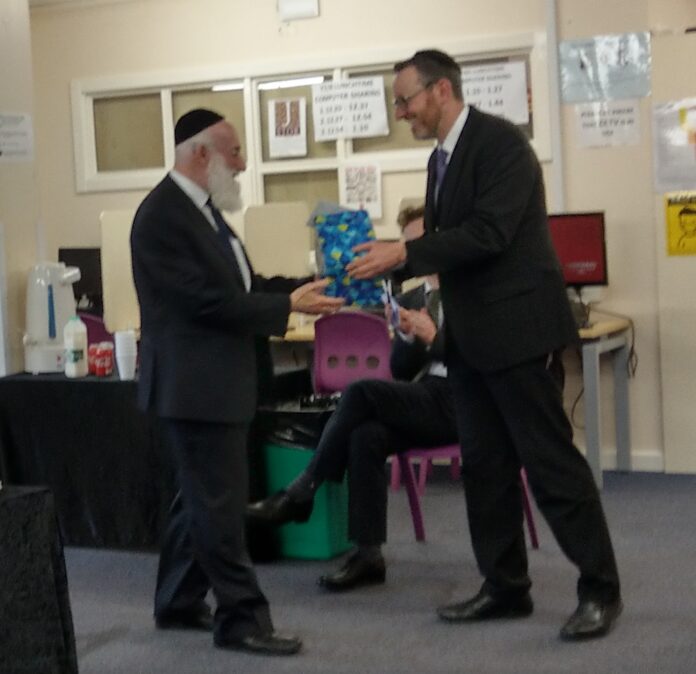 Last week Hasmonean said farewell to Dr Mett, who has taught A-level Maths for the past 40 years. He joined Hasmonean as a second form pupil back in 1957, skipping a year and rising to the fourth form. The friends he made at Hasmonean have remained his lifelong friends – indeed, as he flew to Israel on Monday to begin his new life in Jerusalem with his children and grandchildren, an old school friend was on the same plane. Dr Mett and his contemporaries have all given to the community; they include R’ Gershon Hager, Judge Jonathan Weingarten, R’ Binyomin Moscovits of Midrash Shmuel, and R’Oppenheimer of Gateshead.

After leaving Hasmonean, Dr Mett learned in Gateshead, and then took up a place at Gonville and Caius to read Mathematics. He shared rooms with another former Hasmonean alumni, Michael Weiselberg. There weren’t many religious Jews in Cambridge in the 1960s, but there were enough to support each other and enjoy the canteen at Thompson’s Lane. From Cambridge, Dr Mett completed a PhD in Physics at the University of Surrey.

So, how did Dr Mett end up teaching at his alma mater? He had a full time job lecturing at the Open University, which was based in Milton Keynes. His Department Head encouraged working from home, which meant that there was time in his schedule. In 1978 he was called by Mr Stanton as the school needed a Maths teacher for the Sixth Form. He joined on a temporary basis…which lasted 40 years!

Although not an accredited teacher, with his ‘vintage’ degree and with maths being a shortage subject, Dr Mett, as he said in our interview ‘got away with it’. It was not a difficult transition as the boys in his classes tended to be more mature and motivated. One of his stand out moments was when a former pupil, Rabbi David Meyer, became his boss! He has always loved teaching, crediting his success as being due to the fact that he has always taught what he is enthusiastic about, and he hope that he has passed this enthusiasm on to his students. When his teaching was observed, his colleague, Mrs Epton said he would always humbly ask how he could have improved his teaching. The response was that his teaching was exemplary and very little needed improving. The lessons were always outstanding. Two of his most recent students, Noga B and Zara A-P said that ‘Dr Mett is a wonderful teacher who always goes to great lengths to ensure we understood all the material. We looked forward to each of his lessons and were very lucky to have been taught by him.’

Now that he has retired, Dr Mett intends to keep up his learning with his existing Chavrutot via Zoom and to enjoy his family in Israel.

Rabbi Golker remarked that ‘I am a “talmid chaver” of Dr Mett. A student turned colleague. But it is not just in school that I have learned to respect and admire Dr Mett. He is a stalwart of our kehilla leading many worthy communal enterprises with dignity and dedication. Perhaps the most famous is the Netz minyan which Dr Mett has run for decades, which at the height of summer means a 4am start!’ He continued: ‘Dr Mett is a role model in integrity, humility, dedication and yiras shomayaim (fear of heaven) and will be sorely missed not just in the Hasmonean family, but in Anglo Jewry as a whole.’

Mr McClusky said at the farewell event that his career since 1978 spans eight UK Prime Ministers (since James Callaghan) and a similar number of Hasmonean Headteachers or Executive Headteachers. The fact that his life as student was spent at Hasmonean means that his whole life has been dedicated in one or way or another to the institution. This is a truly remarkable achievement.

He is held in the highest esteem even until today by students and the whole Hasmonean community owes him an immense debt of gratitude for his lifetime of service.