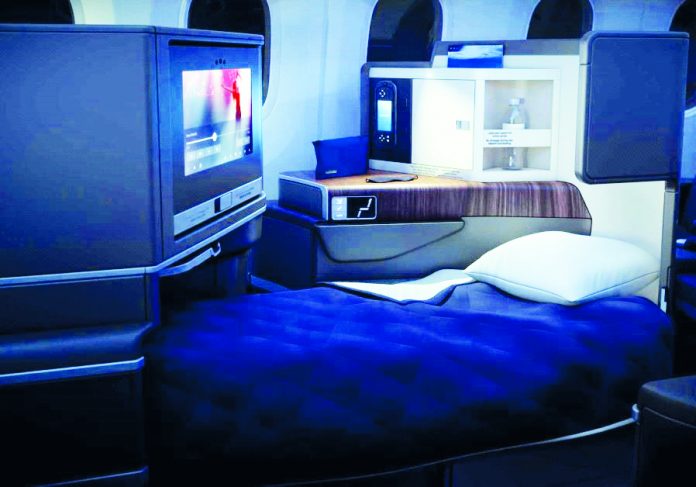 El Al, who operates an all-Boeing fleet, is preparing to take delivery of sixteen new powerful Boeing 787 jets by the end of August. The plane’s maiden flight is scheduled to take place in August and will begin with routes to Europe before flying to North America in October.
The Boeing 787 Dreamliner soared onto the aviation market nearly six years ago and compared to El Al’s aging fleet of long-haul planes, the 787 is described as a modern wonder with attention to detail felt in every step of the aisle. The majority of luxuries will naturally be felt by premium classes, but passengers throughout the aircraft will also experience cleaner air, lighting designed to reduce jet lag, reduced experience of turbulence, larger and more hi-tech windows and the simulation of a lower cabin altitude.
Many of the technological advancements on board are a revolutionary use of composite materials in creating the fuselage and wings of the 787. The composites used weigh less than the traditional materials usually used and also reduce the number of rivets and bolts needed, making the entire structure even lighter overall.
The big benefit to El Al – aside from attracting a more discerning passenger – is more fuel efficiency: the 787-9 will save about 20% compared to the planes it is designed to replace.
Raising the fuel efficiency means the Dreamliner has also opened up new routes globally that previously weren’t thought feasible or profitable. According to Boeing, more than 150 new non-stop routes have opened up since the 787s came onto the market. These include a direct Tel Aviv to San Francisco flight, operated by United, which launched last year.
El Al used to fly direct to Miami from Tel Aviv before cancelling the route in 2008 due to rising fuel costs. But El Al with its new 787 Dreamliner is likely to re-establish that route.
Since El Al took delivery of its first Boeing jet (which was the 707-420) on 24 April, 1961, the airline has always operated a Boeing fleet. But many of its 42 planes – in particular those on long-haul flights – are aging and in urgent need of an upgrade. The average age of El Al’s long-haul fleet is approaching 20 years.
The new Dreamliners will be replacing El Al’s 747 workhorses (some of which have already retired), as well as some of the 767 jets and will bring “video on demand” service as well as power and USB sockets to everyone on board.
There will be no First Class aboard El Al’s Dreamliner’s – the options are Business, Premium Economy and of course Economy. The Business area features lie-flat seats, a high-level of privacy, direct-aisle access for every passenger, plenty of personal storage space and of course the biggest TV screens on board. El Al also said in-flight Wi-Fi will become available on its Dreamliner’s at some point in 2018.
The screens in every class will increase – to 16” for Business, 13” for Premium Economy and 12” for Economy.
Overall the economy area – where the vast majority of passengers fly – isn’t radically different. The legroom there is actually an inch less than on the 747 and 767s, according to data available. But the seats come with a six-way adjustable headrest, and the improvements felt by every passenger should give those in the back of the plane a boost as well.
One of the more dynamic changes involves the windows. Throughout the cabin, the windows are dramatically larger, so it isn’t only those seated along the windows who can observe the view. The tops of the windows are taller than the tops of the seats giving the impression that every seat is a window seat.
In addition there are no longer plastic pull-down shades. Instead each one has buttons to electronically lighten and darken the window – but never fully obscure the view. This way no one passenger can lift a shade, blinding his fellow slumbering passengers mid-flight. The cabin crew can also limit the adjustments during certain hours, but not totally block the usage.
Boeing also put a lot of thought into the on-board lighting and the new system is designed to help reduce jet lag, the company said. The LED lighting allows for gradual dimming and brightening, in order to help passengers adjust more easily to their new destination. The company also said the planes are outfitted with technology to reduce the feeling of turbulence while in flight.
El Al has also upgraded its fleet with eight new 737-900 jets in operation on short-haul flights to Europe. After the airline receives its first Dreamliner in August, the next will follow before the end of the year. By 2020, all 16 El Al 787 planes are slated to be flying to the airline’s long-haul destinations. It is now just weeks away from its final tests and checks before flying to Tel Aviv from just outside the Everett factory in Seattle, Washington for its maiden voyage on 23 August.
Israelis and Jews living abroad have often shown a loyalty to El Al and have always flown with them for security and perhaps a desire to feel at home in the air. But over recent years its aging planes and outdated technology have turned many customers away to the low-cost airlines. El Al also suffered a blow to its reputation in its drawn-out dispute with its pilots over pay, which resulted in many delayed and cancelled flights.
The cost of reshaping the Israeli national airline’s fleet will be around £1.1 billion which is quite an investment to claw back lost customers, especially as five other airlines are now flying to Tel Aviv from London.