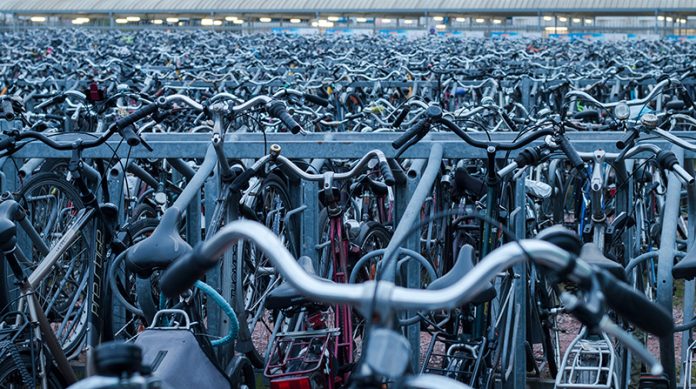 “To be honest with you, at this moment in time I must own over 1000 bicycles, yet I can’t even ride one,” Mark Abraham tells me at our interview on Sunday. He has earned the respect and appreciation of charities, police forces and prisoners. Networking with all the above, as well as with prestigious universities and top-class bike suppliers, you would be forgiven for thinking Mark’s primary source of income is the two-wheeler market. It isn’t – Mark specialises in IT.

A mere two years ago, Bushey-based Mark Abrahams thought up a venture from which thousands will gain annually. It is called “Recycle your Cycle.” Now, besides the environmental benefits of three thousand bikes per year made fit for reuse instead of going to the landfill, there is a further societal benefit. The recycling process takes place in Category-C prisons. What prisoners do if unoccupied is anyone’s guess, so various prisons do offer recreational, educational and training courses. However, Recycle your Cycle is unique in that it trains prisoners in a skill they can reuse once freed. “This will hopefully help them to either find a job or go self-employed as there is demand for bicycle repair and vacuum cleaner repair technicians,” Mark says.

This relatively young venture could thus serve as prevention for further crime. Government statistics, published in April this year by the Ministry for Justice, reveal that the reoffending rate in 2015 was an overall 25%. Although this marked a slight reduction from the previous year, the figure of juvenile offenders had been on the rise, as well as Adults released from custody, both being at 38% or more chance of reoffending within one year of their release.

Mark’s experience in the last two years is every aspiring entrepreneur’s dream: sourcing on average 300 bikes per month, getting a foot in the door of major supplier Evans Cycles, and creating jobs for 150 prisoners in over 7 prisons. His method is one that has many lessons and life skills for start-up businesses, notwithstanding the fact that Recycle your Cycle is a not-for-profit endeavour.

The primary beneficiaries are hospice charities. “We have a relationship with hospices across the UK.” The refurbished bikes are sold in charity shops, benefiting local hospices.

So, where does Mark source the cycles? Universities are keen to rid their campus of graduates’ possessions, especially if they’ll be put to a worthy use. Same goes for the police, whose collection of stolen or abandoned bicycles achieves little by collecting dust in the police station!

In addition, bicycle retailers such as major supplier Evans Cycles have a trade-in deal. Bring in your bike to purchase a new one and receive up to £250 trade-in cash, the lion’s share of which goes towards this charitable cause. This way, Mark will collect over 1500 bikes in the course of April and May 2017 alone!

Recently, the recycling has grown into Vacuum Cleaners, or, as they are known on these shores, Hoovers.  “We wanted a product that could enable prisoners to learn a skill that could help with their employment prospects as well as have a profit margin for the charity”, Mark explains.  If a first-hand Dyson costs £350 and you can buy a refurbished one with a six-month warranty for £70-£100 wouldn’t you consider it? The current figure at the workstation refurbishments stands at 200 Hoovers per month.

Turning up to the prisons proudly sporting his Kippa and sometimes even his Tzitzit out, Mark enjoys the prisoners’ banter and requests for “bagels with smoked salmon”. “We have workshops in several prisons around the country,” Mark explains. From Coventry to Cardiff, Liverpool to Leicestershire, both police forces and prisoners are grateful for this lease of life granted to the inmates. Instead of menial tasks inmates are more often assigned, each prisoner helps to fix approximately ten bikes a month and, more recently, Dyson’s and Henry’s. “It’s a full morning work from 8:30am to midday, followed by lunch, then back to work till 5pm”.  You see real job satisfaction from some of the prison inmates when they show me how they’ve taken a broken bicycle and totally stripped it down to component parts and rebuilt it using both refurbished parts and new parts, ready for use, plus they are pleased they are giving something back to society as the bicycle or vacuum cleaner will be going to a charity. The prison term is served as usual and the workshops take place on the premises of the prison. However, one great way of ensuring the prisoner will not re-offend and end up behind bars once more, is to help them get on their own two feet by enabling them to have a viable career option upon their release or even set-up a repair business for themselves

“This country is bicycle mad”, Mark explains, “Especially with the weather warming up”.  With quality refurbished adult bicycles starting at £50.00 and childrens at £20.00, this enables all sections of the wider population to gain the social, fun and health benefits of cycling. University students are some of his most frequent beneficiaries of the Recycle your Cycle enterprise.

Recycle your Cycle has come a long way since the “early days“ (i.e. 2015!) when Mark himself used to do the schlepping, transporting the bikes from supplier to the workshops in his own van. Not so today, where a full team of employees ensure the wheels of the bikes keep turning, enabling the disadvantaged to begin their own positive cycle in life.

This is just the start as the plan is to open more prison workshops and to have workshops outside of the prison environment to help disadvantaged groups gain some vocational skills.

We hope that over time this venture will raise significant funds for Hospice and other charities plus have helped some ex-offenders gain employment and not re-offend.

As this venture is now up and running Mark is turning his hand to a new venture, this time commercial around Cybersecurity, hopefully more about that in a few months.