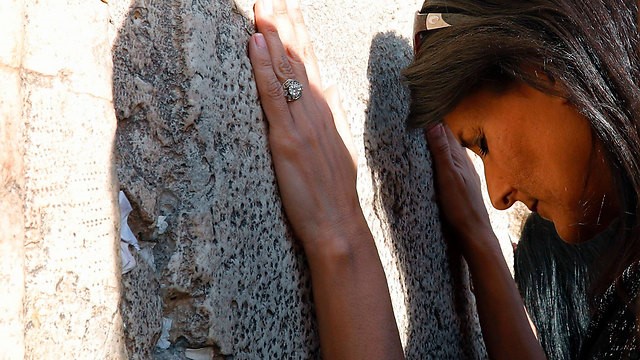 The three-day visit to Israel last week by US Ambassador to the U Nikki Haley, is still causing excitement throughout the political corridors. Over the years, royalty, heads of state and government, high-ranking ministers and diplomats from many countries have visited the President’s residence, but rarely has the visit of any dignitary generated as much feeling of great enthusiasm and eagerness as the US Ambassador.
President Reuven Rivlin usually welcomes guests in a reserved way but this time was more enthusiastic. With his face radiant and in a voice so soft that it was barely above a whisper, he told Ms Haley how delighted he was to see her. “It’s a real pleasure,” he repeated over and over, eventually saying, “We appreciate your strong hand on the world’s most important stage in support of the security of the people and the State of Israel. With your support, we see the beginning of a new era. Israel is no longer alone at the UN. Israel is no longer the UN’s punching bag.”
The two did not engage in much political debate, unlike the meeting last month with President Trump, but there was a subtle diﬀerence for all to see. Trump had been Israel’s best friend before his election and then, like his predecessors, had reneged on his promise to move the US Embassy from Tel Aviv to Jerusalem. Haley had proved to be Israel’s best friend in the United Nations after she was appointed, and the diﬀerence was clear for many to see.
The US Ambassador was accompanied by her Israeli counterpart Danny Danon, who was warmly embraced by Rivlin – both of them having been Likud members of Knesset in the past. The US Ambassador to Israel, David Friedman, was also present alongside a ﬁve-member delegation.
In his speech to the dignitaries present, President Rivlin said there was still a long way to go for the UN to change its biased stance against Israel. He mentioned the Human Rights Council, which he said had been hijacked as a weapon against Israel and UNESCO that “seeks to rub out the history of the Jewish people.”
Ms Haley was thrilled to be in Israel and very appreciative of the support received from the people of Israel. But she said, “I feel a little guilty because all I did at the United Nations was tell the truth.” She had never taken kindly to bullies, she added, “and the UN has bullied Israel for a very long time.” Pledging that she would not let that happen any longer, Haley declared, “This is a new day for Israel in the United Nations.” She was also optimistic that, following her recent visit to Geneva, in matters pertaining to Israel it would also be a new day at the Human Rights Council.
During her visit, she saw and experienced many places in Israel including the Western Wall. Her visit was exactly 50 years after the Wall was captured by Israeli forces in the Six-Day War, and she said a prayer.
The ambassador received a detailed explanation of the history of the Kotel from the rabbi of the Western Wall, Rabbi Shmuel Rabinowitz. When a fence was put up to separate her from the crowd, she insisted on praying together with all the women who were there at the time, saying she wanted to be treated like everyone else. In her meeting with Prime Minister Netanyahu, she said “If there is one thing I have no patience for, it is bullies” and “the UN was being such a bully to Israel, because they could.” Ms Haley also told Netanyahu, “I think they know they can’t keep responding in the way they’ve been responding.
They sense that the tone has changed. We were talking with some ambassadors in Geneva, who are all on the Human Rights Council, about Agenda Item Seven [which calls for Israel to be singled out for constant condemnation], and some of them were embarrassed by it.
They acknowledge the fact that it just makes no sense. You can’t sit there, and of all countries, Israel?” Nikki Haley also visited the
Holocaust Museum and Yad Vashem. Accompanied by Danny Danon, she was taken north to a location overlooking the borders with Lebanon and Syria, where she received security brieﬁngs from Israeli military oﬃcials.
Haley then observed various UN operations in various parts of the country and concluded her visit with meetings in the Palestinian Authority area.
President Trump’s pick for United Nations representative has gained much popularity in Israel. Haley gave her very ﬁrst press brieﬁng at the UN back in February when she strongly denounced the Security Council’s bias against Israel and vowed that the US would no longer turn a blind eye to it.
Later in April, as she presided over the council, Haley set new rules for the forum’s monthly Middle East debate and insisted that countries discuss issues such as Iran’s support for terrorism, the Syrian crisis, Hezbollah and Hamas, instead of exclusively focusing on what she called “Israel bashing.”