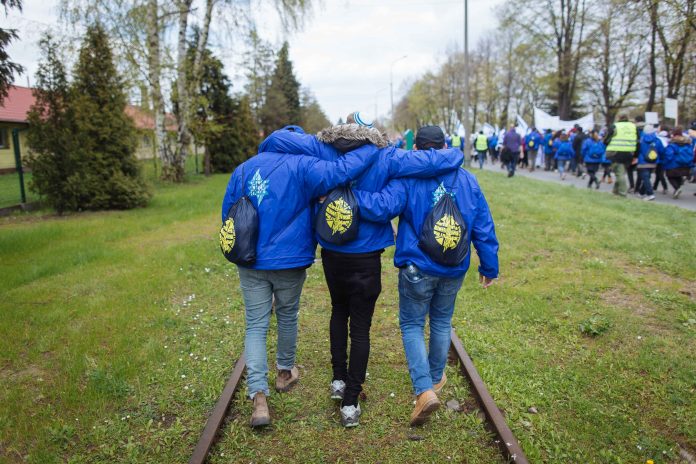 The business section of The Jewish Weekly has earned its fame for inspiring our readers with great in-depth articles on how  determined people have started businesses completely and utterly from scratch and turned them into successful companies, providing a living not only for their own families, but for many others too.

This week, we stay true to the theme of inspiration, but digress slightly to show Jewish Weekly readers how one man, working in the banking sector in New York, Tokyo and Hong Kong, decided to change his life and dedicate most of his time to using the Jewish people’s past as an inspiration to better many young people’s futures.

Scott Saunders grew up with virtually no known connection to the Holocaust, other than the fact that he was Jewish. An international career saw him live together with his family for three years in New York, three and a half years in Tokyo and 15 years in Hong Kong, working for big names such as UBS and JP Morgan.

Living so far from home, community became an important factor in the Saunders’s home, with Scott’s wife particularly involved in various events. Sipping his coffee, Scott smiles as he tells me how he still maintains close contact with many friends from his time abroad, despite being back in London since 2010.

Being friendly to everyone is part of his nature, and despite having nothing in common with the old man who sat next to him in shul each week, who simply went by the name of Joseph, Scott always made sure to say Shabbat Shalom and goodbye to him.

But the banker’s life was about to take on a new significance. Scott was invited to a commemoration evening for Chiune Sugihara, a former Japanese diplomat who served as vice-consulate for Japan in Lithuania.

At the risk of his own execution, he defied his own governments orders to save more than 3500 Jewish families during the Holocaust by issuing them with transit visas to get out of war-torn Europe and escape certain death at the hands of the Nazis.

From his base in Kovno, Lithuania, the Jews he saved included the famous “Mir Yeshiva,” which still exists today in Israel. (The story of how Mir ended up in Shanghai is certainly worthy of its own Jewish Weekly article, perhaps at a later date.) Sugihara was awarded the “Righteous Among the Nations” medal by Israel in 1985 for his heroic efforts.

The evening was so inspiring that Scott decided to further his own research and learning. But his quest dramatically became more personal when he attended the funeral of the old man whom he had sat next to in shul for all those years, but hardly knew. The rabbi mentioned how the deceased’s wife had revealed to him that her husband, Joseph Shimkin, had been one of the recipients of Sugihara’s visas and had arrived in Japan on the very last boat in 1941.

Not only had he himself been saved, but he devised a fake seal of the Japanese’s consulate, enabling him to forge documents that were identical to Sugihara’s. His fake visas were estimated to save over several hundred Jews from Auschwitz and other death camps, and he issued these despite the fact that he had already lost his own wife and child. After moving to Japan, he ended up staying there, remarried and started a new family.

“The fact that my ex-neighbour in shul had such a stunning history which I never knew when he was alive, made a profound impact on me,” Scott tells me, with a tiny teardrop glistening in the corner of his eye.

After that, he started getting more involved in Holocaust education for young people. It began by bringing survivors in to speak to different groups, and it wasn’t long before Scott was leading a group of 10 adults on a trip to Poland together with a few survivors.  This first trip only made Scott want to go again and to take Holocaust education forward in a bigger way then he could ever have imagined.

After moving back to the UK in 2010 and completing a master’s in Modern Jewish History at the age of 49, he realised that many organisations did their own thing when it came to the Holocaust, but there was little joint collaboration.

He decided to get in touch with the international March of the Living, an international educational program that brings Jewish people from all over the world to Poland on Yom Hashoah, Holocaust Memorial Day, to march the three kilometres from Auschwitz to Birkenau.

This had been going since 1988, with former Chief Rabbi of Israel Rabbi Lau, himself a survivor, involved from the beginning. Until 2010, the March had seen over 11,000 Jews coming together to examine the roots of prejudice, intolerance and hate, but with no official delegation from the UK.

Together with others, Scott set up the March of the Living UK to encourage UK participants to join with the international community in marking this important event each year, with a full five-day program. Scott tells me that the aim of the UK March is threefold: “To further Holocaust education for university students and young adults, to bring people of all religious backgrounds together, and to touch people’s identity by encouraging each person to expand one area of their engagement, whether it’s volunteering, helping out on campus or visiting the sick in hospital.”

Regarding education, Scott explains that studying the history of the nations in Europe is a vital cog in understanding how people can end up doing what they did to the Jews during those terrible years. He wants the learning to challenge people by covering new ground and learning about things that they would never have come across before.

When it comes to togetherness in Poland, people often put aside political differences to pray together as one united people, carrying on defiantly after so many years of trouble and hate. “Two weeks ago, at the mass Havdalah ceremony, we had 260 people, arm in arm, with survivors in the middle of the room lighting candles. It didn’t matter to anyone that some people were from BA, some belonged to Tribe, whilst others represented other institutions, such as Noam or LJY, [they] all came together as one,” Scott recalled.

Touching people’s identity is perhaps the biggest passion that drives him on to organise a march that takes up almost a year of planning each time. “My team spend the entire year before the March, organising fundraising to cover the participants,” which amounts to 95% of the total costs. But it’s all worth it when we see how people stand at the gates of hell and are spurred on by a powerful “call to action.”

Something inside each person sparks them to expand their identity in one small way, which fulfils Scott’s ultimate goal, namely taking each person on a personal journey of growth, each according to their own level.

Scott’s dream is to make the March of the Living UK a “rite of passage” for young British Jews, in the same way that an Israel tour has become a must. Having grown the UK delegation from just 10 participants in 2010 to 260 this past year, the former Hong Kong banker has truly shown that with great determination and passion, a person can really achieve anything they want if they just believe enough in themselves.

For more information, or to enquire about next year’s March, log on to http://marchoftheliving.org.uk/