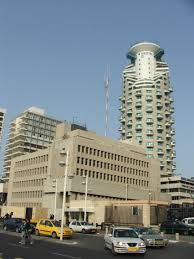 An unofficial American delegation arrived in Israel for a two- day visit to determine what options are available for the United States to move its embassy from Tel Aviv to Jerusalem. Republican Congressman and Chairman of the US House of Representatives Subcommittee on National Security, Ron DeSantis met with Israeli officials to give assurances that there is overwhelming support in Congress to have the embassy move its headquarters to Jerusalem.

Ron DeSantis told Likud Member of Knesset Yehuda Glick over lunch at the King David Hotel that US law already allows a move for the embassy, although there is a security waiver which the president exercises every six months. However DeSantis believes that because Donald Trump campaigned aggressively for an embassy move last year and even reiterated his promise after being elected, the president may refuse to sign the waiver form in May. “He is a man of his word,” DeSantis said at the King David Hotel press conference. “I don’t think he will sign the waiver form in the same month the people of Jerusalem are celebrating the 50th anniversary of the unification of the city.”

In addition the American ambassador to Israel David Friedman would have already been confirmed by that time, which would make it easier to follow through on the policy. So Congressman DeSantis believes it is going to happen and for that reason decided this was an opportune time to visit Israel to look at potential sites in the capital. As chairman of the House Subcommittee on National Security, which is responsible for the security of US Embassies around the world, Congressman DeSantis and his team toured potential sites across Jerusalem. These included the Consul General site on Agron Road and the US Consul Section on David Flussal Street. DeSantis added “We also took a look at the Diplomat Hotel, which is close by, and which Americans have an interest in,” and mentioned a partial leased piece of land in between that area and the King David Hotel. However, his assessment was that the US Consul Section is the most realistic building to turn into an embassy but said it was the president and his administration that will have to decide which plot of land would be used.  “It is exciting for a lot of us who believe that we have had a rough go in the previous eight years on US-Israel relations, and I think we feel like we are resetting this.”

MK Glick spoke with The Jewish Weekly, saying “Our eternal capital has been Jerusalem for thousands of years, and I told the Congressman that America should recognize reality and take the necessary first steps at least as a symbolic gesture.”
Many Knesset members on all sides ,including those from the former Labor Party, now known as the Zionist Union, also believe the United States should no longer delay an embassy move to Jerusalem. Zionist Union MK Nachman Shai said “I have always believed the United States should move their embassy to Jerusalem. It is our capital and it is where all embassies should be based.”

In 1995 Congress passed the Jerusalem Embassy Act with a large majority to relocate the US Embassy. But within that law passed there was a waiver that the president could extend the date to move it every six months citing national security concerns. Even though Presidents Bill Clinton and George W. Bush campaigned on moving the embassy from Tel Aviv to Jerusalem, they did not follow through on their commitment and Barak Obama had no intention of relocating the Embassy.

King Abdullah II of Jordan has previously warned in unusually brusque terms that moving the embassy would cross a “red line” and could entail “catastrophic” consequences. But Jordan is desperate for US money as Islamists grow within the Kingdom, so Abdullah is likely to accept a US Embassy move as he cannot afford to cut ties with the Trump administration. In return the Americans will continue to look for intelligence and cooperation in the fight against radical Islam.

During the American election campaign, Trump tweeted that he had “great respect” for Jordan’s monarch. The two spoke by phone shortly after Trump was elected. Jordan, like most US allies in the region, has avoided criticising Trump’s re-introduced temporary ban on refugee admissions and on travel to the US by citizens of Iraq, Syria, Iran, Sudan, Libya, Somalia and Yemen. Jordan serves as the custodian of Islam’s third holiest site, located in Jerusalem’s old city.