Oakwood knocked treble chasing Hendon United Sports out of the Peter Morrison Cup 4-1 in a penalty shoot-out after an end-to-end goalless quarterfinal clash.

A highly anticipated clash did not disappoint. Premier League champions-elect Hendon took the game to the defending title winners O’s and missed a couple of early chances. Cuby wasted an opportunity before Hendon appeared unlucky to have a goal disallowed following a free kick. Only a last-ditch tackle denied Oakwood as both times defended well before the penalty action.

Sharifan has been in fine shoot out form as he made a crucial save to knock HMH out of the competition in a third round thriller that ended 3-3 before a 10-9 shoot-out win. Once again Sharifan came up trumps before Cuby sealed the win.

Hendon will look for revenge when they take on Oakwood in a replayed Cyril Ankestein Trophy semi-final on Sunday. The O’s however remain on track to win two cups this season.

Hendon’s David Garbacz said, “We felt we were the better team during the 90 minutes but came up against an inspired Oakwood keeper who carried his form into the penalty shootout.”

In Division One, Stoke Salmon are one win away from Premier league football next season after a 6-0 drubbing against lowly Scrabble. Alex Bleetman, Harry Goldsmith, Jamie Smaje (2), James Barnett and Nick Barnett scored the goals to put Stoke on the brink of top-flight football.

“Another win, an all too familiar feeling for us now,” said Stoke boss Jamie Weiner “It was a big win against a team that put up a great fight in the reverse fixture that takes us a crucial victory from securing the title.”

Stoke play Redbridge Jewish Care Purple at home on Sunday where they can pick up a first piece of silverware as a club.

Redbridge versus Hampstead Ducks was postponed due to Covid-19.

In Division Two the top of the table fixture between Geez Park Rangers and London Athletico was called off due to Covid-19.

Oakwood Town led by two goals at Qarabagel before running out 3-2 victors. Milbrook Park Calcio shared the spoils 2-2 with Boca Chillers. Brady FC collected a vital point against Camden City in a 2-2 draw to move level with bottom club Temple Fortune B who lost 2-1 to Redbridge Jewish Care White. 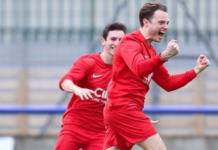 Hendon hit Maccabi for six on march to title