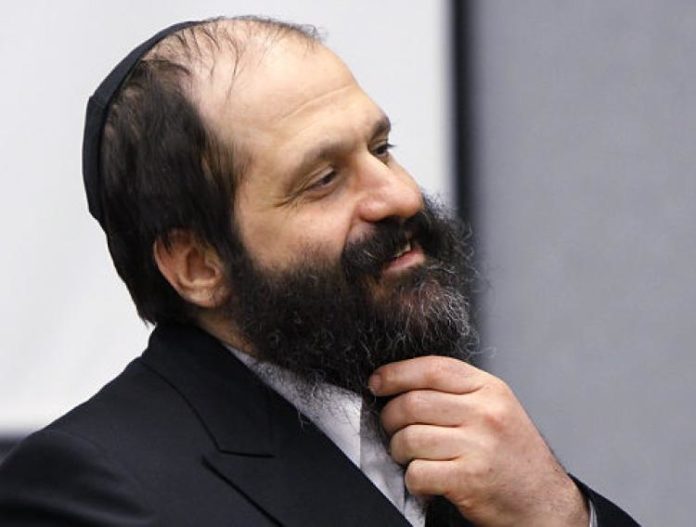 President Donald Trump has sensationally commuted the prison sentence of Sholom Rubashkin.
Bipartisan leaders from across the political spectrum encouraged the action, which was announced yesterday in a White House statement.
The 57-year-old father of 10 children had previously run the Iowa headquarters of a family Agriprocessors business that was the country’s largest kosher meat-processing company.
But he was convicted of bank fraud and sentenced thereafter to 27 years in prison in 2009.
Rubashkin has served more than eight years of the sentence, which has been deemed excessive in light of its disparity with sentences imposed for similar crimes.
‘This action is not a Presidential pardon,” the statement noted.
‘It does not vacate Mr. Rubashkins conviction and it leaves in place a term of supervised release and a substantial restitution obligation, which were also part of Mr. Rubashkins sentence.
‘The Presidents review of Mr. Rubashkins case and commutation decision were based on expressions of support from Members of Congress and a broad cross-section of the legal community.
‘A bipartisan group of more than 100 former high-ranking and distinguished Department of Justice (DOJ) officials, prosecutors, judges, and legal scholars have expressed concerns about the evidentiary proceedings in Mr. Rubashkins case and the severity of his sentence.
‘Additionally, more than 30 current Members of Congress have written letters expressing support for review of Mr. Rubashkins case.’
Former high-ranking DOJ officials expressing support for review of the much-publicised case included Attorney General Edwin Meese III, Attorney General Michael Mukasey, Solicitor General Seth Waxman and FBI Director Louis Freeh.
Current Congress members across the political divide expressing support included Senators Bill Cassidy, John Cornyn, Orrin Hatch, Mike Lee, Rand Paul, Roger Wicker and Yvette Clarke. Representatives also across the political landscape expressed support.
The second youngest of Rivka and Aaron Rubashkin, a kosher butcher from Brooklyn, New York, the family is well known in the Chabad-Lubavitch movement.