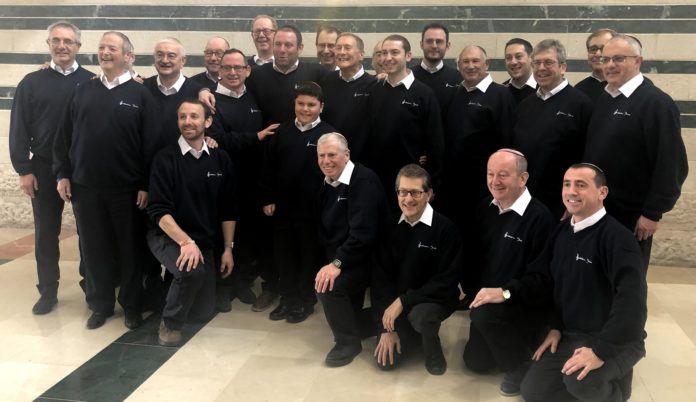 London – 9 September, 2019.  The Shabbaton Choir will be taking particular care to ensure that their presentation looks as good as their voices will sound when they sing at the annual choral Midnight Selichot service on motzei Shabbat, 21 September.

Filming them will be a TV crew from Israel, led by renowned Israeli film director Shlomi Albo who, with documentary producer Pamela Wagman, spent a day with the choir when they visited Aleh Negev in Israel during their recent Solidarity Through Song mission, singing and entertaining some severely challenged children and young adults.  This will form part of a special tribute to commemorate the forthcoming 30th anniversary of the choir entitled “A Day in the Life of the Shabbaton Choir” to include their renowned Selichot service, which this year is returning to the magnificent Hampstead Synagogue.

Joining the Choir for the first time since retiring as Chief Rabbi in 2013 will be Rabbi Lord Jonathan Sacks, who will deliver the address before the service, before handing over to chazanim Rabbi Lionel Rosenfeld (Western Marble Arch Synagogue) and Jonny Turgel (Stanmore & Canons Park Synagogue), who will lead the service.  For boy soloist Rafi Posner this is his second Midnight Selichot service, and he is still only 11 years’ old.

For the choir, the evening will be tinged with sadness, as this will be their last Selichot service under the baton of Musical Director, Stephen Levey.  After 34 years’ association with the Shabbaton Choir, Stephen will be stepping down in spring 2020.  Stephen has composed many pieces for the choir including a number within the Selichot service (including a new composition for this year’s service).  He also composed the well-known anthem Oseh Shalom, which not only has been sung by hundreds of choirs around the world, but which also has over 3.1 million hits on YouTube!

“I have been privileged to have led the Shabbaton Choir through so many memorable services and concerts, and worked with many fine musicians.  However, the support, energy and drive of our chazanim – most notably Rabbi Lionel Rosenfeld, Jonny Turgel and Shimon Craimer, has been fundamental to the success of the choir,“ commented Stephen Levey.

“In addition, we are grateful to Rabbi Lord Jonathan Sacks for the encouragement and inspiration he continues to give to the Shabbaton Choir.  We are delighted that we will be together again for this year’s Selichot service,” he added.

Explaining her decision to capture this service, producer Pamela Wagman said, “This year’s Selichot service is unique, so its filming will serve as a lasting record of one of the great British religious traditions. It will also give a different glimpse of the choir’s diverse talents and help expose the work of the choir to a wider audience, particularly when they sing to those with physical and learning challenges.”

“People in our community really do not know what miracles the Shabbaton Choir perform around the world, bringing the joy of Jewish music to benefit not only able-bodied audiences, but those for whom hearing such performances could never be an option because of their condition,“ she added.

Film director, Shlomi Albo, added the final comment.  “I was overwhelmed, moved and honoured to have been asked to film the choir performing at Aleh Negev.  It was simply joyous,” he said.

About the Shabbaton Choir

Since 1991, the Shabbaton Choir’s innovative choral sound has been heard in synagogue services and concerts throughout the United Kingdom and abroad.  The harmonies and arrangements are written with the aim of bringing out clearly the mood and meaning of the words.

Since 2003 the Choir with Chazanim Rabbi Lionel Rosenfeld and Jonny Turgel and Shimon Craimer have sung their way through ten emotional missions to Israel entitled “Solidarity Through Song” – visiting and reaching out in music to those wounded by terrorist bombings; to hospitals, schools and orphanages; to homes for the elderly, centres for the mentally and physically disabled and medical day-care centres – emotional and unforgettable experiences for all involved. They have also given concerts in all the major cities and in areas affected by rocket attacks, such as Sderot in the South and Shlomi in the North, and conducted Shabbat services. The Choir is already planning another Mission in February 2020 which will be the 11th presentation of “Solidarity Through Song”.

In 2005, the Choir and Chazanim were invited by the town of Neheim, Germany, to commemorate Kristallnacht in a full day of prayer and song around the town with the theme of “Never Again”: at the Jewish burial-ground, the restored synagogue (now a museum), and an evening concert for an audience of several hundred – another unforgettable experience.  In November 2007 the Choir and Rabbi Lionel visited Poland with the Yad Vashem UK Foundation, leading memorial prayers at Auschwitz-Birkenau and an evening service in the ancient Rama Synagogue in Krakow.

In 2014, following on from an earlier visit in 2012, the Choir together with Chazanim Lionel, Shimon and Jonny were invited with Rabbi Lord Sacks to return once again to Los Angeles in support of The Harkham Hillel Hebrew Academy. In an exciting and successful few days the Choir and Chazanim conducted Choral Shabbat services and concerts to packed congregations at synagogues throughout Beverly Hills and at the Harkham Hillel Gala Dinner.

In 2015 the Choir together with Chazanim Lionel and Jonny took part in emotional ceremonies at the Bergen Belsen concentration camp to mark the 70th anniversary of the liberation of the camp by the British Army in April 1945. As well as singing at the camp, the Choir and Chazanim also took part in a service of remembrance at a cemetery at the nearby British garrison and they also sang for the Jewish community in Hanover. In January 2018 they returned to Hanover for a Gala Concert on Holocaust Memorial Day. We have been invited to return next year for the commemoration of the 75th anniversary of the liberation of Bergen Belsen.

In January 2016 the Choir celebrated its 25th Anniversary with two concerts at the Arts Depot in North London. The Choir was joined by Chazanim Lionel and Jonny together with Chazanim Steve Robins and Avromi Freilich, Rabbi Danny Bergson and the Choir of the Immanuel College Preparatory School. In the same year the Choir was invited to sing at the prestigious Templeton Award ceremony in London when Rabbi Lord Sacks was presented with the Templeton Prize.

The Choir has recorded many times for radio and television, and has frequently featured as the musical accompaniment in Rabbi Lord Sacks’ BBC Rosh Hashanah broadcasts.  The Choir has also released six albums with Chazanim Rosenfeld, Robins, Craimer and Turgel. The seventh and most recent recording is the Commemorative 25th Anniversary Album entitled “Anim Z’mirot”, comprising 13 original compositions by its musical director, Stephen Levey, and featuring Chazanim Lionel, Shimon and Jonny.