For Jarmila Gorna, music is more than a big part of her life, it is her life.  As she explains, “I cannot live without music, it’s my oxygen. Music is being created in my head all the time, in everything I do. I am constantly hearing arrangements, melodies and harmonies, as I try to find a quiet space within my busy busy brain for them to take form.” She has used this passion to create a new method of teaching music which has changed the lives of many women, and given them a sense of freedom and empowerment through her musical style.

Jarmila grew up surrounded by music. Her mother was an opera singer at the Lodz Grand Opera House in Poland, and many of her uncles and cousins were talented musicians. Family occasions would often become impromptu musical performances around the dinner table with a mixture of traditional and modern musical styles ranging from classical to jazz and klezmer. Composing from the age of 5, Jarmila went on to graduate from the Karol Szymanowski Academy of Music in Katowice, where she studied jazz, but took special interest in the 18th and 19th century British folk music.

Moving to the UK, she embarked on her journey of self discovery toward her own musical brand. Over time she developed an improvising avant-garde, style, which morphed into a two-hour multi-media musical experience known as Trance-Magic Piano Sessions, combining live performances and video footage.

“Hashgachah”, her first album released in 2004 saw this style expand, to combine her disparate talents as composer, vocalist, pianist and producer pushing her own boundaries ever further. Not shy to invent what then became her signature wordless vocalising – a unique style of singing without words. Her attainments were described by critics as ‘richly diverse and brilliantly conceived’ and very well received by the music industry. It merited presentation for nomination for a BBC 3 Radio World Music Award.

For many within the Stamford Hill community where she lived, having a

professional musician in their midst led to Jarmila being inundated with requests to perform at various community events. Although classically trained, and teaching classical music at Avigdor School in Stoke Newington (as it then was), it was her unique exciting semi improvised piano arrangements that people were keen to hear. Many were also excited to learn this new approach to music, which entailed a shift of emphasis from the more traditional system of musical education by notation and exam grades, to an appreciation of music through intuition, improvisation and an ability to play by ear.

For Jarmila, her main concern was whether she could actually teach something which she herself had never been taught, which might be unteachable to those without “natural born talent”. Nevertheless, she persisted with the same determination and bravery she had shown throughout her musical career, through her own compositions, her performances in major music venues, as well as releasing an album on her own label. She spent the next few years working with her students teaching them from home how to develop her own unique way of teaching music, which became The Gorna Method.

Jarmila’s popularity grew, and over several years hundreds of students have benefitted from this exceptionally effective approach to learning, and for many of her students this methodology has been a real ‘game changer’.

The female students who come to learn music with Jarmila are of all ages, and each have their own reasons, but all find it is a great way express themselves and gives them a sense of creative fulfilment. As she explains, “It is amazing to see that they get so much more than just the music from these lessons. Many of them send me letters and cards at various occasions, all telling me how positive their experience has been. Some have said that it has been like a dream come true and has given them a chance for their musical talent to be drawn out. For others it has ‘given them wings to fly’, and that music is the most precious gift they have ever received. As a teacher and musician, it is inspiring, overwhelming and a real honour to be able to help these women to develop and grow in this way.”

a creative piano arrangement, improvisation or composition, which is at once engaging and stimulating. In the right hands the method of producing these empowering skills of intuitive music-making, can be taught to students willing to put in the effort to master them. The real magic is that the method is not constrained or limited to the naturally musically talented, but can transform even the mediocre and those not gifted with natural abilities, into competent and entertaining piano players with all the appearances of displaying natural flair. It can transform lives and hundreds have experienced this metamorphosis and have undergone a lasting, life changing experience.”

Jarmila can also be seen as a positive role model and example to women when it comes to realising their own ambitions. In her personal career, she has recently released her second album, entitled ‘Aspaklaria’, a Talmudic word meaning ‘a lens’. The album is very much inspired by her ongoing spiritual journey. ‘My songs on Aspaklaria are songs of love and fear, of one’s personal shattering and self-reconstructing, of questions asked and perhaps answers given, of getting connected and staying connected, of reaching to the Heavens and reaching for the stars.’

The album was released, again on her own record label: Jarmila Music, and recorded in her own self-built studio. There she took on the roles of sound engineer and producer for her own work. Her students are also able to make their own audio recordings at Jarmila’s studio. An ex-student and a friend, Mrs Sheila Grossnass, explains: “When I first met Jarmila I was looking for singing lessons myself, and had no idea of her tremendous talents. She was very encouraging to me in my own ambitions, and I felt that my life became instantaneously enriched. Jarmila has brought something amazing and extra special to Stamford Hill which cannot be suppressed and I feel is the catalyst for inspirational musical growth which is an exciting development for our community. Her students love her and I now know why.”

Jarmila can be seen as having re-drawn the musical map of Stamford Hill. Some of her graduates, who became school teachers themselves, were transformed into inspiring educators often ending their own lessons with a ‘Gorna-style’ musical flourish. Fundraising events, SEM and school shows and other community occasions are all enhanced by this instantly recognisable ‘Gorna signature’, which demonstrates the impression Jarmila has made on the whole community.

Talking to Jarmila it is obvious that she really enjoys using her talents to help others develop. She has been overwhelmed with the results of her unique system of teaching and how much The Gorna Method has given her students, many of whom had no musical knowledge or background when they first started learning with her.

Looking to the future, she is the process of setting up a Teacher Training Course for her graduates, so that they will be able to go on and teach others using The Gorna Method as the foundation. As she explains, “It feels like a gift from Hashem that I have discovered a way of helping others in a manner I didn’t know I had and am able to use this to empower women of all ages through music. If I can help anyone live their dream and experience this alluring taste of freedom-through-self-expression – I will have fulfilled my mission.” 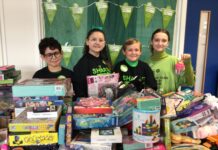 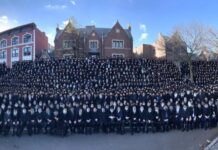