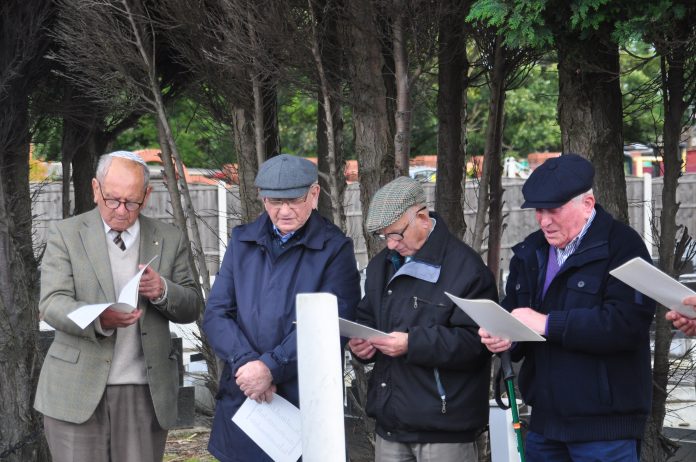 Thousands of events will mark Holocaust Memorial Day this year.
The annual HMD commemoration marks the day Auschwitz concentration camp was liberated in 1945 just eight months before the war officially ended.
Events also remember subsequent genocides around the world including Cambodia, Rwanda and Darfur.
This year’s theme ‘The Power of Words’ is a reminder of how words can make a difference, both for good and for evil.
“Hundreds of thousands of people will attend around 8,000 activities all around the country,” explained Holocaust Memorial Day Trust (HMDT) chief executive Olivia Marks-Woldman.
“We know from work we do at the Trust these events make a difference to what people know and learn about the past. They also make a difference to how people feel for those who suffered in the Holocaust and other genocides.”
She added: “Over 90 percent of people who go to an HMD activity go on to take some form of action as a result of what they are learning and feeling.”
In one of the initial events Holocaust victims were remembered at City Hall in a poignant ceremony on Tuesday.
Survivors joined Mayor of London, Sadiq Khan, Rabbi Joseph Dweck, MPs and London Assembly members.
Reflecting this year’s theme, the Mayor read an excerpt from The Diary of Anne Frank.
“It is vital that we all take time to hear the accounts of Jewish survivors and refugees who went through unimaginable horrors during the Holocaust,” he said.
“As the years pass, and as we have fewer survivors to pass on their extraordinary stories, we must work even harder to ensure younger generations learn the lessons from history.”
He added: “The Holocaust was one of the very darkest times in human history.
“Today, we take time to remember the six million Jewish lives cut short, as well as the millions killed in subsequent genocides, and we commit to strengthening our resolve to fight hatred and intolerance in all its forms.”
Rabbi Joseph Dweck addressed the audience and performed a memorial prayer.
London Assembly chair Jennette Arnold opened the event.
“Some events can leave you speechless, the Holocaust is one such event, as are the other subsequent genocides,” she said.
“We must find words to express our disgust, dismay and determination never to let such events happen again. We must also find the words to pass on to future generations to ensure no one can ever forget.”
Holocaust Educational Trust chief executive Karen Pollock added: “We are reminded that sadly antisemitism, racism and prejudice still exist in our society.
“Hateful words have an impact, but so too does speaking out against them and today, we must recommit to always doing so, wherever hatred is found. We must treasure the precious testimony of Holocaust survivors, and pledge to always remember their stories.”
Those gathered heard emotional accounts from Holocaust survivor Manfred Goldberg and from Kemal Pervanic, who survived the genocide in Bosnia in the early 1990s.
The ceremony featured London schoolchildren, who presented their experiences from the Lessons from Auschwitz project together with music by Francesca Ter-Berg and Carol Isaacs courtesy of the Jewish Music Institute.
In other events, The Lord Mayor of London, Alderman Charles Bowman, welcomed 150 survivors of the Holocaust and genocide at Mansion House last Friday.
HMDT organised the reception honouring contributions to British society made by survivors and refugees of the Holocaust and genocides.
Speakers included The Lord Mayor, Olivia Marks-Woldman and Sir Eric Pickles.
“Many survivors have made London their home and continue to make an immense contribution to British life and our wider society,” said Alderman Bowman.
Longstanding HMD supporter Sir Eric joined the Trust as the first Honorary Vice President alongside Holocaust survivor and Honorary President Ben Helfgott.
“There are few people who have done more to ensure the lessons from the Holocaust and other genocides are taught and learned,” said HMD chair Laura Marks. “He has campaigned tirelessly to ensure we never forget just where intolerance and hatred can lead.”
Staff and volunteers from Jewish Care’s Holocaust Survivor Centre supported the reception.
Forty-eight hours earlier Holocaust survivors joined peers at a House of Lords reception.
Hosted by Lord Shinkwin and Baroness Finlay, Holocaust survivor Joan Salter, awarded an MBE in the Queen’s New Year’s Honours list, described how she sailed from Europe to America aged three without her parents.
“A couple took me from the orphanage, my name was changed, my past wiped out and it was not until 1947, that I was reunited with my birth parents,” she recalled.
Among regional events, Manchester City Council screened a Holocaust related film to representatives from secondary schools and community groups earlier this week.
Holocaust survivor Dr Peter Kurer and Mike Levy of the Holocaust Education Trust led a presentation at the event.