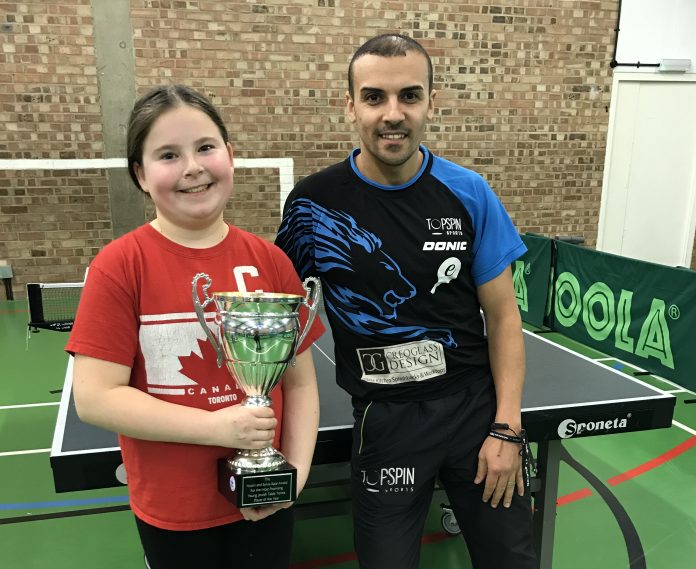 Nina Anders is an award winning, RIBA chartered architect with over 25 years’ experience. Since setting up her own business, COCO Architecture, just over 6 years ago, she has since been involved in some exciting projects including most recently with Rabbi Schneebalg’s Synagogue in Edgware, a project which was a finalist for the London Borough of Barnet’s design award 2017

When Miri Rosenberg received a table tennis table for her birthday, her parents hoped that it would help her deal with a family tragedy, but over the past 18 months, not only has it helped her come to terms with the loss of her sister, but has also led her to receiving an award for her sporting achievements.

Miri’s older sister, Liora passed away suddenly after suffering a bleed on her brain and pneumonia, just 3 months before Miri’s 9th birthday. The tragedy seriously affected the whole family, but her parents, Lauren and Stuart were determined to try and help Miri to celebrate her birthday the best she could in the circumstances. As Lauren explains, “It was her first birthday without her sister, and we wanted to find something to make her feel a little better given what we had all been through. We thought a table tennis table would be a great thing for the whole family, so that Miri could play with us, as well as with her sisters. She was really thrilled with it, and took to it really quickly. People had often said that Miri had amazing hand-eye coordination when playing sports, so when she started playing table tennis it was a great use of her skills. It is something that she really enjoys.

Miri had always enjoyed playing table tennis on the outdoor tables at her school, Sinai Jewish Primary, but being able to play on her own table really helped her to develop her talent. Lauren explains, “Losing her sister at such a young age was difficult for Miri, but having table tennis to focus on has really given her a lift through these difficult times.”
After taking part in a Maccabi GB inter-synagogue competition representing Kinloss synagogue, earlier this year, where she the team won a medal, she was encouraged to take part in a National competition in the under 12 category. Despite having not played competitively for very long, she was keen to take part and her parents, along with her sisters, Judy, and Adina were there to cheer her on. Her other sister, Fiona, was unable to make it as she was in Israel studying in seminary. When her name was announced as the winner of the ‘Yoram and Sylvia Katz Award for Most Promising Young Jewish Table Tennis Player of the Year 2018’, Miri says that she felt “excited and really happy that I had won, but also a bit shocked as well.”

For Miri, playing table tennis is a way of relaxing for her, but she also really likes the competitive element of the game. Miri explains her preparation for competitions. “I warm up before my session, I see myself winning, and focus on that. I watch the ball, and I practice. She now trains 3 times a week for around 7 hours, playing either at other synagogue table tennis clubs, or practising with her coach, Eli Baraty, which shows her dedication and enthusiasm to the game. Miri now has high hopes to take her table tennis skills all the way to the Olympics, by becoming a professional international table tennis player, and she is determined to make her dream a reality. Lauren credits her daughter’s achievements to a positive mental attitude, as she explains. “Miri came across an old little trophy when we were clearing through Liora’s stuff, and she used this as a way to focus on winning. Two weeks later, she was holding an actual trophy in her hand.”

Miri’s success in table tennis has been quite a surprise to her family, as no one else is particularly sporty, but as the award proves, she obviously has a talent. “We are all encouraging her to go as far as she can with it. We are all really proud of her, and happy for her that she has found something that she really enjoys. For Miri, she feels that having something positive to focus on like table tennis has really helped her through difficult times. “I really love table tennis as it is fun, but I can also express my feelings when I play. It is helping me to move on and I fell like Liora is playing with me.”

As one of the only girls playing at many of these events, she has had to learn overcome their prejudices. “Sometimes when I play with the boys, they can make comments about my abilities, but once I start playing they can see how good I am!” She also hopes to one day to run a table tennis club for children, that she hopes will ‘put a smile on their faces’. Miri feels that through playing table tennis she is able to express her feelings and deal with her emotions. As she explains, “when I play, I feel like Liora is playing with me, and that encourages me to do well.”

If you would like to nominate a ‘Woman Of Worth’ to be featured on this page then please email micaela@thejewishweekly.com