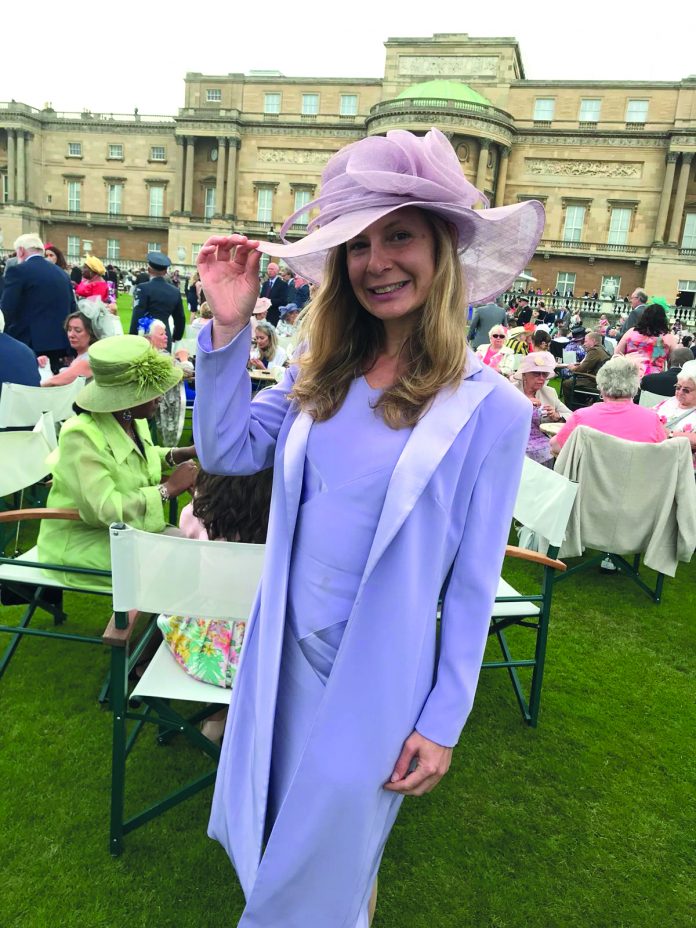 This week, Suzie Simons was lucky enough to be a guest at a Royal Garden Party at Buckingham Palace in recognition of her voluntary work with the Royal National Institute of the Blind. The charity is the UK’s leading organisation that supports blind and partially sighted people, offering practical and emotional support.

Suzie became blind soon after having her first child, Daniel, around 13 years ago, and found adapting to her new situation very difficult. As she explains, “When I was first registered blind, I didn’t deal with it very well. Because it was such a sudden thing, I didn’t know what to do and I kind of put my head in the sand for a while.” Through support from her friends and family, she began to face up to her situation and went on to have her second child Hannah.

When her youngest child started nursery, she decided that she wanted to try and do something positive not only to help herself, but to help others dealing with similar situations, and decided to train as a counsellor. As part of her course, in her second year she had a voluntary placement at the RNIB based in King’s Cross, which she really enjoyed and decided to put her course on hold to continue working at the RNIB, where she retrained as a facilitator.

It is through this role that she became involved in “Living with Sight Loss” courses at the RNIB. These courses are open to anyone experiencing sight loss, no matter what stage they are in their sight loss journey. They run for one day per week over four weeks offering help and advice on a range of relevant topics and issues. Guest speakers come in and talk to the groups, sharing their own experiences. The course offers practical advice, such as help with everyday living, finding a job or even looking at sports and fitness that can be done with a visual impairment.

The course also helps to introduce participants to the huge array of gadgets that can be used to help them in their daily lives, and Suzie feels that technology is very important, and finds them essential in her own everyday life. As she explains, “The amount of technology currently available is amazing and has helped me to regain some of my independence. I have a watch that speaks to me, a scanner that reads my mail and a computer that can read what is on the screen, so I can read my emails, keep in touch with people and surf the web”.

Suzie feels the courses offered by the RNIB allow people to grow in confidence and gain independence. They also offer participants a chance to meet with other visually impaired people, so they can share their experiences and learn from each other. Suzie appreciates first-hand how difficult it can be to adjust to sight loss, and how useful these course can be. As she explains, “I feel I have been incredibly lucky to be surrounded by amazing friends and family but finding RNIB helped me so much in learning to accept my sight loss although I didn’t know the course existed until much later, and wish that this type of course had been available to me when I first lost her sight. This is one of the reasons I continue volunteering. I want to be part of helping to empower other visually impaired people.”

For Suzie, losing her sight has not stopped her leading an extremely full life and she is determined to carry on doing the things she loves.  “I think that having a disability does not mean that you can’t do things; you just have to do things differently. I still enjoy going on holiday, going out with friends and especially reading which I do now through headphones. It’s all about doing things differently! You only get one life on this Earth, so you have to make the best of what you have and live it to the full.” She has also had many opportunities that she would not have had had it not been for her visual impairment, such as going rally car racing, being a torch bearer  at the London Paralympics at London 2012 and receiving her invitation to hang out with royalty at the garden party.

Since becoming blind, Suzie has found that there are a lot of misconceptions about visual impairment which she is keen to address and hopes that there can a better understanding of this within mainstream society. As she explains, “There are many people who think that if you are blind all you see is black but actually this only really applies to around 6 to 7% of blind people and most that are registered blind actually have some residual sight.” In Suzie’s case, she has no central vision but has some peripheral vision which means that she can see shapes and contrast but no details no matter how close she gets, and colours are now very distorted.

As well as her visual impairment, Suzie unfortunately also suffers from MS which she developed in her late teens, which can leave her with chronic pain and fatigue. It is the same condition that her father also had.  As she explains, “My own father passed away from the same condition, so when I was first diagnosed I was concerned about how it would affect me and how my life would be but I have learnt to accept it. I don’t want to just be viewed as a blind person or someone with MS and for people to feel sorry for me” she continues, “I have other areas of my life which are just as important and relevant to me, such as being a mummy to two lovely children.”

Suzie and her children have been very much supported not only by their strong network of friends and family but also by local charity, GIFT. As Suzie explains, “GIFT have been great in many ways for us and have helped my children doing the things that I struggle with.   When the kids were very little they would work with the volunteers who helped them with their reading and writing. I wanted to make sure my disability never held them back‘.

For Suzie, being invited to attend the garden party is a real honour and she really enjoyed the day. She hopes to be able to continue helping others to feel empowered and gain confidence through her work, and would also like to develop her training and coaching skills so that in the future she can possibly go on to help others dealing with traumatic experiences.  She believes that whilst her situation is not ideal, that everyone has their own issues that they have to deal with. “For me, I feel I have come a long way and grown so much since I was first diagnosed with MS and understand that whatever happens in life, no one gets out trauma free.” She does not dwell on her situation or let it define her, and continues to retain her positive outlook and make the best of every opportunity. As she explains, “I think my biggest coping strategy is not to judge myself or compare the way I am coping to other people. I don’t want my situation to define me or confine me. I think that whilst you can’t always control what happens in your life, it is how you deal with it that really matters.”