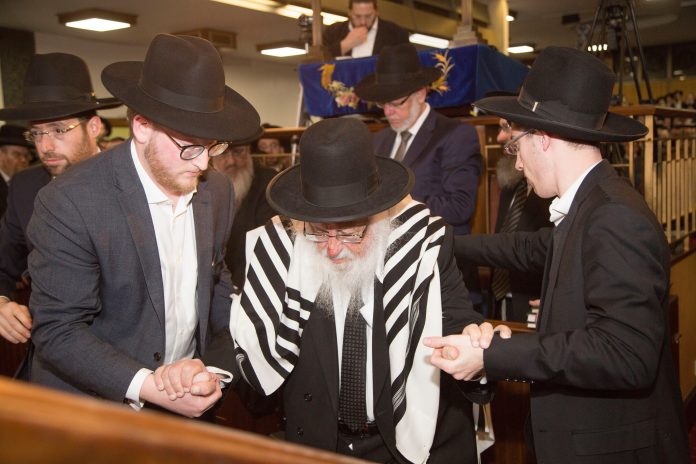 London Jewry had the rare opportunity Monday and Tuesday to host some of the leading Torah giants of this generation. At a Hesped on Monday night held in memory of the Gadol Hador, Maran Rav Aharon Leib Shteinman ZT”L, the large Kinloss Shul was packed to capacity as throughout the evening an estimated 1200 people arrived from across London to pay their respects to one of the leading Jews of our generation.
The evening was enabled by British Friends of Yeshivas Orchos Torah. Of all the institutions at which Rav Steinman stood at the helm, Orchos Torah was exceptionally dear to him as the Rosh Yeshiva stated upon its establishment, “These years that I received from the Almighty were for the sake of establishing a new Yeshiva for Jewish people.” In the twenty years since its founding it has grown into a network of Torah institutions producing some of the finest minds in Israel in Eretz Yisroel, numbering over 3000 students altogether.
With great anticipation, the crowd rose to their feet as the prominent Rabbis entered the shul. Rabbi Povarski, leader of the famed Ponovezh Yeshiva, and Rabbi Ezrachi leader of Ateres Yisroel, were accompanied by the leader of Imrei Binah, Rabbi Shmuel Baron.
Former head of the London Beth Din, Dayan Chanoch Ehrentreu led the crowd in recital of Tehillim.
Chairman and member of British Friends of Orchos Torah, Mr Daniel Klien, introduced the evening by speaking of the great sadness felt by many in the community at the passing of the great leader of the generation. He spoke of the love the great Rabbi had for every Jew and his great passion for Torah.
Rabbi Povarsky was the first one to give a Hesped. Citing lessons from, and novel interpretations in, Chazal, Rabbi Povarksy spoke of how Rav Shteinman had reached greatness in all areas of Torah, of Chessed and in being a true leader of the congregation. In our efforts to emulate the ways of the Tzaddik, we ensure that his legacy will live on and his light is never truly extinguished
The chairman then called upon Rav Ezrachi to deliver a hesped. Rav Ezrachi began by saying that it is impossible to fully appreciate the greatness our generation merited to witness in the Rosh Yeshiva. Rav Steinman was a “Heavenly person”, he explained, who’s entire life was one of “constantly living with the presence of Hashem without a moment’s interruption. “Every decision was with the World to Come in mind as well as what can be done to hasten the arrival of Moshiach.
Rav Ezrachi explained the teaching of our Rabbis that Hashem does not bring a person to a high position before testing him in small matters. What is this “small matter”? This is areas that other people consider small but a truly great person busies themselves not only in “big matters” but also in so-to-speak “small” matters, in recognition that nothing is small when it comes to serving Hashem.
Rav Steinman carried the burden of his great Yeshiva with its numerous branches, as well as the entire Torah world and beyond, on his frail shoulders, yet at the same time when approached by a person, man woman or child, requesting help, he would graciously grant it to them, no matter how preoccupied he was.
We were sustained by his merit and we continue to be so after his death, as we seize the lessons of his life into our own lives.