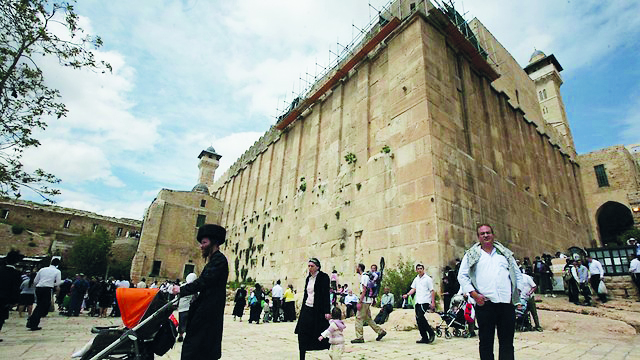 The Palestinian Authority is asking the UNESCO World Heritage Committee to declare the Cave of the Patriarchs and the entire Old City of Hebron an international heritage site by means of false claims.
The PA are planning to make the request to UNESCO on 1 July in Krakow, Poland, when the annual meeting takes place.
There are 1,052 UNESCO-listed World Heritage Sites, nine of them Israeli and two of them Palestinian. The registration process and declaration of each site usually takes a number of years, but the PA want to take advantage of a clause in the regulations that allows to fast-track this procedure by claiming the sites are in danger of destruction by the “occupying force.”
Among other things, they claim that Israel carried out an exceptionally large concrete casting at the site, while Israel claims that it is only a small addition to the area and that it was coordinated with the Jerusalem Islamic Waqf.
The Heritage Committee has 21 member countries and its composition is very problematic for Israel: Finland, Poland, Portugal, Croatia, Turkey, Azerbaijan, Indonesia, Philippines, Korea, Vietnam, Kazakhstan, Tunisia, Kuwait, Lebanon, Burkina Faso, Zimbabwe, Angola and Tanzania – none of which is among the ten countries that voted for Israel on the UNESCO Executive Committee concerning Israeli conduct in Jerusalem and Gaza.
Each request is accompanied by the opinion of a professional assessment body that makes a recommendation. In the two previous sites inscribed by the PA in 2012 and 2014, the Church of the Nativity and the Battir terraces, the professional body’s recommendation was negative, but the committee voted for its approval following pressure from the Arab-Muslim lobby.
The Israeli delegation to UNESCO, headed by Ambassador Carmel Shama-Hacohen, has already begun making efforts to stop the PA’s plans about a month ago.
Israeli ambassadors in the member states joined, and given the sensitivity of the issue, it appears that the Prime Minister will be required to address the matter personally. In order to prevent the inscription, Israel must mobilise at least one-third of the voting countries in its favour, an almost impossible task. If the decision is made, the Palestinians will be able to claim that the control over the site should be transferred to them, which will bring international pressure on Israel.
“This is a clear continuation of the attacks and hallucinatory outrageous votes in UNESCO regarding Jerusalem, the Temple Mount and the Western Wall,” said Shama-Hacohen. “Israel respects Muslim sensibilities and ensures freedom of worship, order, security, routine maintenance, and the development of infrastructure supporting the holy sites.”
She added, “Not only is the very essence of their claim outrageous, but so is the way in which the Palestinians accuse the Israelis with blood libels, which never occurred.”