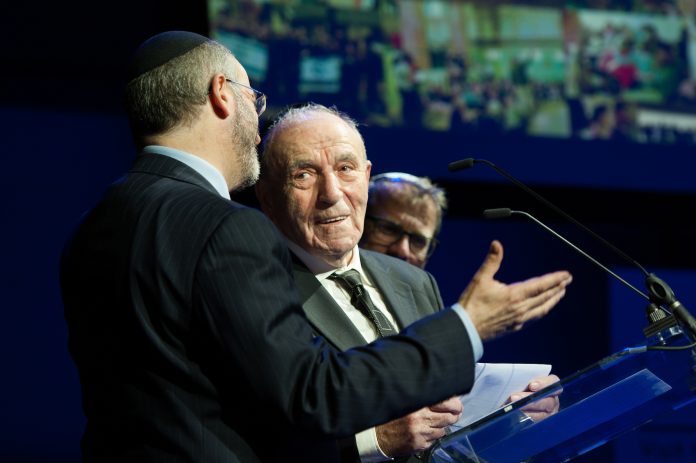 Renowned historian Simon Schama and Emmy award-winning filmmaker Andre Singer have endorsed the Holocaust education work of JRoots and the charity’s increasing focus on combating Holocaust denial.
The Apollo Theatre, on Shaftesbury Avenue saw 400 people help raise awareness and support for the charity’s work to engage young Jews with the Holocaust. The charity, whose main work takes thousands of students each year to Poland to connect Jews with their past, has increasingly found young Jews want help to deal with Holocaust denial online.
Sunday’s event screened segments of Mr Singer’s documentary Night Will Fall. The film won him an Emmy for unearthing the most most graphic and harrowing footage of liberated Nazi death camps shot by British and American army photographers in 1945. The footage remained buried by both governments for 70 years due to political concerns about Palestine and the Cold War.
The evening also saw the premiere of the a new biographical film about 88-year-old JRoots guide and Auschwitz Survivor Leslie Kleinman entitled: “#8230 A Legacy of Love”.
Mr Kleinman, whose Auschwitz number is 8230, returned to the death camp seven times last year to help guide JRoots tours. The film was produced by the charity and directed by JRoots’ co-founder Rabbi Naftali Schiff.
JRoots also screened a short film about the fierce Holocaust denial increasingly faced by school-aged young Jews on their social media.
Simon Schama comments during the event’s debate:
“We are living in a time when truth itself cannot be taken for granted, empirical evidence cannot be taken for granted. Even the testimony of survivors, by those who are under the spell of some malignant fascination with conspiracy, will not be persuaded.
“We begin with somebody in the Whitehouse, in the US where I live, who willfully, out of a combination of mischief and ignorance and idleness refuses to recognise the basic empirical standing of evidence. He’s not an antisemite, I’m not talking about that
“We once thought that the Web would deliver us from untruth and would bring everybody together, but it took us a long time to realise that the Web is the perfect nest of fantasy,demonic fantasy; that you can have communities that are nourished by the mutual supply of lies. This is an issue for everyone here tonight to go out into the street and the rest of the world and be warriors for truth.”
Discussing the proposed new Polish law making it a criminal offence to attribute Holocaust history to Polish nationals, and asked if we are entering a new phase of what’s permissible when discussing the Holocaust, Andre Singe’s comments during the event’s debate were:
“It still shocks me that political expediency can so override an obvious moral imperative of exposing what had happened 70 years ago. That’s what terrifying about the footage shown in my documentary being put under the carpet and stuck on the shelf for so long. Whether we are now entering a new phase of that kind of thing now, who knows, but it’s the fact of political expediency seems to me to still override telling the truth.”
Addressing the audience, Leslie Kleinman said:
“JRoots do not take people to Poland to talk about death and sadness, they talk about life and life that can still be. They talk about Am Yisrael Chai. I have seen thousands and thousands of Jews be connected in their own way to the Jewish story as a result of what JRoots does. And they have allowed me to connect with my past as well.”
JRoots co-founder Rabbi Naftali Schiff said:
“Simon Schama, a globally respected historian, has no doubts about that the fight of the next generation will be for the very historical truth of the Holocaust to remain a truth. We thank him for making that shocking reality eloquently clear to our audience and for endorsing our work. JRoots is dedicated to equipping young Jews with the experience, facts and desire to take up this critical fight against Holocaust denial into the post-survivor generation, and we are deeply touched that so many supporters will be with us on this journey.”
“We also pay special tribute to Auschwitz survivor Leslie Kleinman BEM for his unrelenting efforts to guide thousand of JRoots participants around Poland giving an unparalleled first-hand education.”