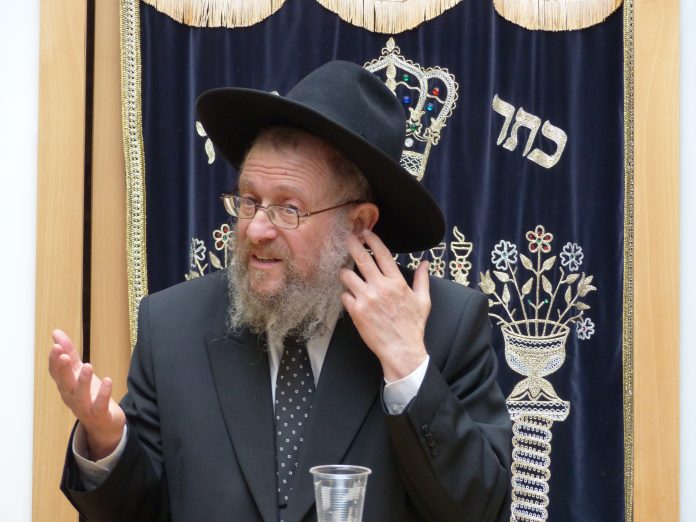 Kehilas Kodesh Ahavas Yisrael (Edgware), one of the United Synagogue’s youngest communities, hosted leading educator Rabbi Noach Orlowek for four days of learning in the lead up to this year’s High Holidays. During this time he spoke to over 1,000 people in total from young school children to great-grandparents and the outcome was unanimous, everyone felt energized and deeply inspired by him and his teachings.
Commenting on Rabbi Orlowek’s visit, Ahavas Yisrael Chairman Joel Silberstein said: “from its very beginning Ahavas Yisrael, under the leadership of our esteemed Rov, Dayan Elimelech Vanzetta, has placed Torah and spiritual growth at the very centre of its existence. Therefore, as a community Ahavas Yisrael is extremely humbled by this tremendous achievement of having provided over 1000 people of all ages, from school age boys and girls to great grandparents, the opportunity to be spiritually inspired and uplifted by Rav Noach Orlowek, a true giant of the Jewish people, in the lead up to this year’s High Holidays.”
Rav Orlowek is Spiritual Dean of the Torah Ore Yeshivah in Jerusalem, in addition to being one of the most sought after teachers and speakers in the Orthodox English speaking world. He’s also a world renowned expert in education, having written several books on the subject. His advice is sought by people from around the globe.
Having learned for many years under the leaders of the previous generation, especially his foremost teacher, Rabbi Simcha Wasserman zt”l, of whom he was one the closest students, Rabbi Orlowek conveys with ease and authority a tradition that binds his audiences and students to the loftiest concepts of Torah.
The visit and learning programme were organized by Dayan Elimelech Vanzetta, Rabbi of Ahavas Yisrael and a long time close student, and by the lay leaders of the community in conjunction with the Chief Rabbi’s Centre for Community Excellence.
Rav Orlowek’s Schedule in London
Rabbi Orlowek had an incredibly busy schedule of public lectures during his visit. He addressed a packed audience of mothers and female educators on Thursday night (7/9) dealing with issues of sibling rivalry and peer pressure. On Friday morning (8/9) the Rabbi visited and addressed students and teachers in four different Jewish schools in NW London.
Commenting on the Rabbi’s visit, Rabbi Ephraim Klyne and Rabbi Yitzchok Freeman, respectively Menahel and Head Teacher of Avigdor Hirsh Torah Temimah Primary School said: “Rabbi Orlowek completely captured the boy’s attention with his warm words and simple but important messages, which were very effectively illustrated by stories and anecdotes. Moreover, the idea that every single child has the potential to be a great Jewish leader can never be repeated and stressed too often.”
Rabbi Dovid Sulzbacher, Head of Jewish Studies of Menorah Grammar School said about the visit: “On behalf of the students of Menorah Grammar School I would like to thank Dayan Vanzetta and Kehilas Ahavas Yisrael for bringing Rabbi Noach Orlowek to our school. He spoke to the students of the lower school where he gave a message of empowerment for the forthcoming High Holidays and to our senior students where he fielded pertinent questions, and gave solid advice to help them grow in their Divine Service.”
On Friday afternoon the Rabbi saw several individuals who sought his wise counsel, rooted in Torah, on important questions. Before Minchah he spoke to a standing room only audience at Kollel Beis Aharon in Edgware before starting a special Shabbaton at Ahavas Yisrael, his host Kehillah, during which time he addressed the congregation both before Kabbalat Shabbat and after the service on Shabbat morning.
One of the common denominators of his lectures was the importance of having and displaying gratitude, which he illustrated with an example given to him by his own spiritual dean from his days as a young boy in Yeshivah, Rav Avigdor Miller zt”l, who said that: “Before asking the Master of the Universe for a sweet new year, start by thanking Him for the one that is now coming to an end.” The packed audience of members and visitors at Ahavas Yisrael was absolutely enthralled by his teachings and his presence. During Kiddush once again the Rabbi made himself available to speak privately with all those who needed to ask him questions. Rabbi Orlowek was then a guest speaker at Edgware United during Se’udah Shelishit, addressing an audience of over 100 in attendance.
After Shabbat, on Saturday night the Rabbi addressed an audience of over 20 rabbis in a lecture entitled “How to continue to grow whilst being occupied with communal needs” organized by Dayan Vanzetta and hosted by Rabbi Dovid Tugendhaft at Beis HaMedrash Nishmas Yisroel in Hendon. Once again, the distinguished audience was absolutely mesmerized by the clarity and power of the message delivered by Rabbi Orlowek. Rabbi Tugendhaft said of the illustrious visit: “Rabbi Orlowek had the merit of learning under numerous leaders of the Jewish People including his Rebbe Rav Simcha Wasserman zt”l and his Rosh Yeshiva Rav Chaim Pinchas Sheinberg zt”l. We very much appreciated how he shared their insights into the inner work of those who are responsible to steer the community and its members in the right direction, which was further illustrated with the retelling of first hand anecdotes about the very lives of these giants of the Jewish People.”
Last Sunday, Ahavas Yisrael hosted a special five hour Yom HaLimmud in preparation of the High Holidays, which was open to and attended by members of several different communities. The lectures dealt with ways of working on our relationship with our own selves, with our fellowmen, and with G’d. The packed audience at Hasmonean Girls School in Hendon savoured every word of Torah and every teaching shared by the Rabbi. The programme concluded with a light lunch and Q&A session in which Rabbi Orlowek once again shared of his brilliance with those in attendance.