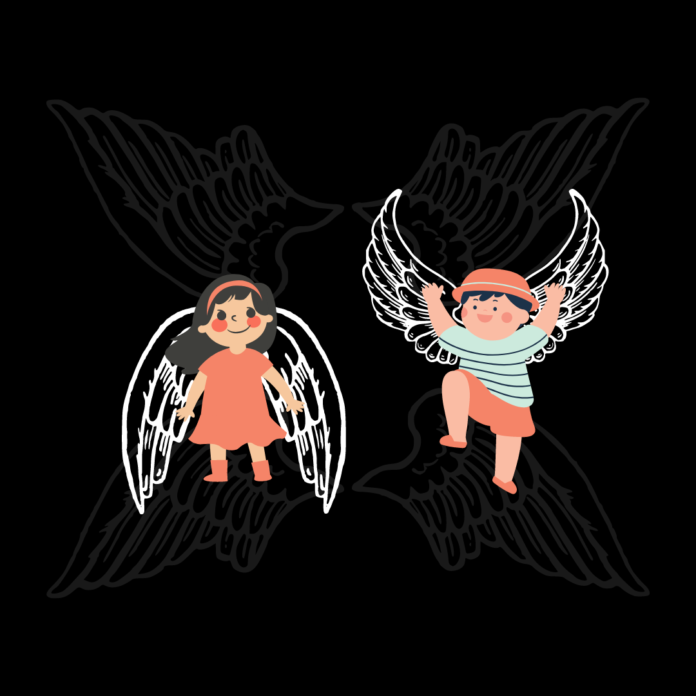 Dear Rabbi
I wonder if you could explain to me a message we can learn from the Cherubs in the Temple. I understand the significance of the Table and the Altar as well as the Ark etc. But what is the message or meaning of the Cherubs?
Naomi

Dear Naomi
There’s much to be said about this which is well beyond the scope of this column. But if there is one significant lesson it is this: These Cherubs are referenced twice in the Torah. Once, as angelic looking children above the ark in the Holy of Holies. The other time is when the Torah relates how they were stationed outside the Garden of Eden, preventing entry, once Adam and Eve were expelled. There, Rashi translates them as, “angels of terror.”
I think that goes to the core of how we raise our children. If we imbue them with values as represented by the Holy Ark, they will maintain their angelic status. They’ll grow up as sources of pride and joy. If not, and we let them do what they want, helping themselves to all the forbidden fruit out there, they’ll become angels of terror. The choice is in our hands.

ADAR 1 OR 2?
Dear Rabbi
I know there is this concept of extra joy and good fortune in the month of Adar. When it is a leap year, hence two months of Adar, is the mitzvah of the added joy in the first or second Adar? I have been debating this with a friend of mine. I maintain the second Adar, because it contains Purim. What do you say?
Yechezkal

Dear Yechezkal
Purim is in the second Adar because we want to keep two celebrations of redemption – Purim and Pesach – as close as possible to each other. On the other hand certain customs (such as a yartzeit) are adhered to in the first Adar (according to Ashkenazim). So which one is it? Well, some follow your reasoning and agree that as Purim is in the second Adar that’s the happy month. But based on the aforementioned and bearing in mind that when the Rabbis tell us, “When the month of Adar comes in one should increase in joy,” without stipulation as to which Adar, then the joy should be maintained in both. In fact, the Lubavitcher Rebbe often mentioned how, in a leap year, we have 60 days of added joy. He also pointed out that inasmuch as we have a principle in Jewish law of certain things being annulled in a mixture of sixty; all negativity that we might experience in our lives or our world should be annulled in the sixty days of joy. Here’s hoping and praying.

GUARD THY TONGUE!
Dear Rabbi
I am astonished by how much gossiping goes on in my Shul. It’s like people come just to gossip about others. There are always copies of the Jewish Weekly around which people take. If you can you write something briefly about the sin of loshon hora I’m sure they’ll read it and maybe the message will get through.
Simon

Dear Simon
Our society is not geared to look down on gossip. It’s a multi-billion pound industry of gossip magazines, TV shows and websites. We’re very disapproving of smoking, of excessive drinking and the like but lashon hara, with its few legal and physical consequences, isn’t considered an evil. For most people, littering is worse than lashon hara. This seeming lack of consequence means that lashon hara is omnipresent.
Did you know there are a total of 31 mitzvot – 14 positive and 17 negative – in the Torah that relate directly or indirectly to forbidden speech. That’s 5% of all the commandments! The Talmud teaches that the tongue is so dangerous that it is hidden behind two protective walls: the lips and the teeth. Our problem is that we don’t appreciate the consequences attached to loshon hora. The Rabbis tell us that someone who speaks loshon hora is tantamount to having committed all three capital sins – idolatry, adultery and murder. When you speak loshon hora you are killing with your words, another’s self-esteem, another’s reputation, another’s livelihood, another’s family, the list goes on. That’s murder. When you speak loshon hora you are obviously privy to information about this other person, hence your behaviour is the ultimate betrayal – you are being eminently unfaithful to that person when gossiping about them. That’s like adultery. And you are abusing G-d’s gift of speech, defying Him as it were – that’s idolatry.
The crazy thing is, if one commits a murder, you have to deal with all sorts of things: disposing of the body, hiding the evidence, possibly escaping the police and the media. So you’re careful about it. When speaking lashon hara you only have to deal with your own conscience and unfortunately we tend to have a pretty easy time of this. The truth is if loshon hora – gossip – was food – most of us would be overweight. I suggest to you that gossip is a far worse plague than covid. But while we struggle with all the variants and mutations of covid, gossip has one easy fix. Simply this: If you didn’t see it with your own eyes, or hear it with your own ears, don’t invent it with your small mind and share it with your big mouth. Speech is a gift and a lot of problems in the world would disappear if we talked to each other rather than about each other.