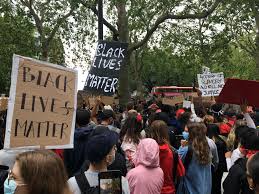 I was surprised that there was no mention in your column last week about the race riots going on in the United States and in fact in the UK and many other parts of the world. What is the Jewish perspective on everything going on right now? Does Judaism even have a position on racism as it is not referenced anywhere in the Torah. I look forward to hearing some words of wisdom.

The most fundamental teachings of Judaism clearly renounce racism altogether, such as “You shall love the stranger like yourself,” or the reminder in Bereshit that all of us – regardless of race, colour or belief system – were born of the same mother and father: Adam and Eve. “Why did G-d create swarms of bees, prides of lions, herds of deer, schools of fish, and flocks of birds, and only one human couple?” asks the Mishna. “So that no one can say to another ‘My ancestry is superior to yours’” (Sanhedrin 4:5).

The single big question to consider is this: Is racism less of an issue today than it was all those years ago? The answer is, absolutely! 60 years ago whites and blacks couldn’t sit together on a bus. Restaurants and toilets were segregated. But that’s not the point is it? The fact is there should be zero racism in a 21st century modern world – full stop! It’s not about progress made! It’s about clearly not enough progress made!

I do think it is necessary to stipulate here the following: The fact that we saw mayhem in the media all week has less to do with racism and much more to do with opportunism. Many of the rioters were anarchists who could care less about social harmony and cohesion. Demonstrating and protesting is good. Rioting and looting is bad! Those people defeat the whole point and purpose and undermine the bigger message.

Still, the hard fact is that a human life was very deliberately taken, snuffed out for the whole world to see! There is nothing that can excuse that in any way shape or form. It tells us that racism is every bit existent in a modern-day world that has no place for it!

Credit has to be granted to governments which have prioritised legislation against race-hate crimes. It certainly makes people think twice before they choose to express any sort of racial sentiment. But what does legislation do apart from suppress something, rather than genuinely cure it? Racism isn’t some virus like polio that can be eradicated by social and legislative medicine. There is after all an ever-replenished sump of resentment that is always with us. You don’t have to go to statistics for this: Anyone who looks into their own hearts honestly enough knows it to be true. Prejudice is one of the principle constituents of the human personality.

To be sure, there’s nothing wrong to have pride in your own nationality and heritage: Englishman, Germans, African Americans, and Jews. Every one of them has a heritage. And there’s a certain virtue to being subjective about your own heritage. I’m especially

proud of my own ancestry – of my people. The problem is when it spills over and it gets to a point of excess when it is no longer about being proud of your ancestry, but turns into a lack of respect for others.

We, as Jewish people, know better than most, what it is like to endure prejudice. We can’t go banging on about Anti-Semitism, and expect others to rally to our cause if we are not prepared to do the same for the benefit of other persecuted minorities. And we therefore have a responsibility to be extra alert, sensitive and responsive to it! The prophet Malachi’s cry “We have one father: One G-d created all of us” says it all.

This does not mean we have to align ourselves with any movements per se. The BLM movement is vehemently anti-Israel, which in itself means they’ve shifted from a social agenda to a political one. That should not be their objective and again blurs the lines and takes away from the bigger message.

As a Rabbi I will state simply this: It all comes down to one of the opening verses in the Torah: “And G-d created man in His image.” The two Hebrew words, B’tselem Elohim, the image of G-d is a concept embedded in men and women equally. But the message is much greater than that. It is about the equality of all humankind. The Talmud makes clear that every human, as an image of G-d, is endowed with three intrinsic dignities: infinite value, equality and uniqueness.

We all live with the objective of striving to be in G-d’s image; our lives are all different and yet the same. If we all respected that reality, if you really believe that “you are G-d’s child” about yourself, then you would believe that about others as well, because you know that G-d has many children. May we indeed know of an era where peace and harmony reigns supreme for all mankind forever more, Amen