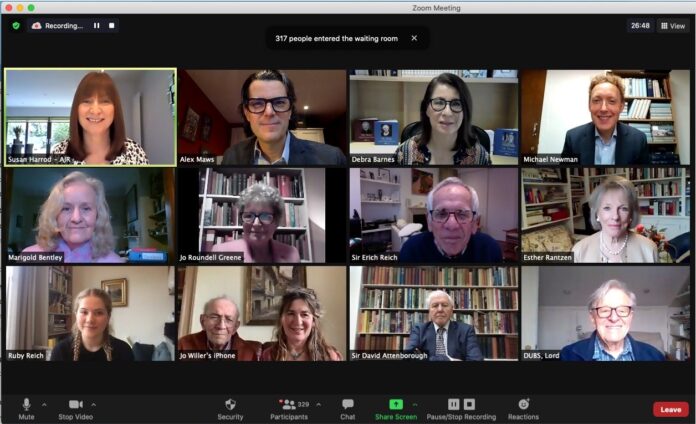 Sir David Attenborough had top-billing at a fascinating online event chaired by Dame Esther Rantzen to discuss Kinder, refugees and host families on Monday 30 November 2020, held by The Association of Jewish Refugees (AJR), and attended by a record-breaking 691 households.

Sir David Attenborough spoke about the role his parents played in giving sanctuary to two Jewish girls who fled Germany on the last Kindertransport. The girls were only supposed to stay a few weeks before moving on to America, but they arrived days before war broke out. He said, “I remember standing by the radio at home listening to Chamberlin announce, ‘and now we are at war with Germany.’ My dear mother looked at us and said, ‘Well, Irene and Helga (Bejach) will be your sisters until the war is over. Now we are one family.’”

Joining them was Lord Alf Dubs, himself a Kind, and Jo Roundell Greene, the grand-daughter of Clement Attlee, whose family also gave refuge to a Jewish boy, Paul Willer, who was also on the event and spoke of his memories of taking cold baths in England and meeting a pet cat for the first time.

Other speakers included Sir Erich Reich, a Kind, and Marigold Bentley, representative of the Quakers in Britain, who were instrumental in securing the route of travel through Europe and finding homes for Kinder and other refugee once in Britain.

Dame Esther shared with the audience that her parents had also fostered a boy whose parents were killed at Auschwitz, and that her godmother drove an ambulance for the Quaker Relief and was in the first civilian party that entered Belsen.

Concluding the event, Sir Erich said that he always treasures the words HRH Prince Charles said to him at one of the Kindertransport reunions, that he was so glad the government of the day gave refuge to the children.

This fascinating event was recorded and will be available to watch on AJR’s YouTube channel: www.youtube.com/c/TheAssociationofJewishRefugees

Notes on the AJR for Editors:

The AJR is also the largest supporter of Holocaust educational programmes, projects and initiatives to commemorate the Holocaust in the UK.

The AJR has produced the ground-breaking audio-visual testimony archive, Refugee Voices. This collection of 250 filmed interviews creates a legacy of the experiences of the refugees and will advance and enhance Holocaust research for future generations. Refugee Voices enables Holocaust researchers and scholars to watch up to 500 hours of film and read fully edited and transcribed accounts. For the first time, researchers will also be assisted by time-codes that, together with a summary sheet and key words section, direct users to specific sections of the films. Details are at www.refugeevoices.co.uk

AJR Head of Educational Grants and Projects, Alex Maws, is a member of the UK delegation to the International Holocaust Remembrance Alliance (IHRA), which brings together governments and nongovernmental organisations to raise awareness of the Holocaust and places political and social leaders’ support behind the need for Holocaust education, remembrance, and research.