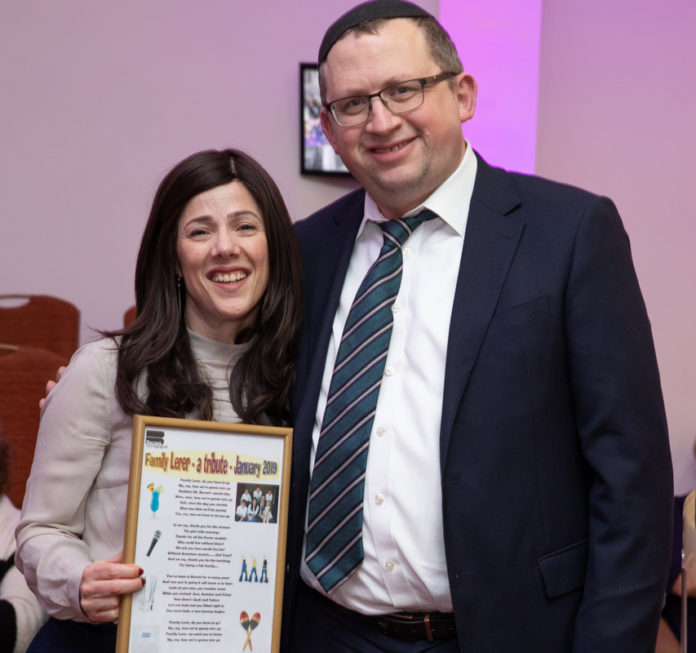 There was a bitter-sweet weekend of reminiscing and celebrating at Barnet United Synagogue to say thank you and bid a fond farewell to Rabbi & Naomi Lerer and their family as they take up their new position at Central Synagogue after twelve and a half years at Barnet.

To a packed Shul on Shabbat morning, including Rabbi Lerer and Naomi’s parents, Rabbi Lerer spoke of the highlights of the Lerer family’s time in Barnet and what the community meant to them.  Barry Flack, Warden of the Shul, read a blessing to Rabbi & Naomi, he had specially written By Rabbi Geoffrey Shisler.  The blessing had been beautifully illuminated by Trisha Hayes and a presentation was made by Barry Flack at the end of the service who spoke warmly of his work in his various positions in the Shul, with the Lerers.  Donna Cohen, in thanking Naomi for all her work in the Shul, presented her with a mosaic photograph designed by Susan Eisen, of 3600 photographs of their time in Barnet. This was followed by a cholent and kugel kiddush generously donated by Barnet Shul members Stewart and Sandra Cohen of La Boucherie.

After Shabbat it was time for the celebrations, that were planned and put on by an industrious committee formed especially for the weekend and ably led by Stephen Silverman, to begin.

On Motzei Shabbat over 200 members of the Shul were entertained to a special edition of Desert Island Disks hosted by Richard Carlowe, suitably dressed in beachwear, who interviewed Rabbi Lerer. Rabbi Lerer, an 80’s music aficionado recalled key moments in his life and the music he was listening to at the time.  Then followed various presentations including a certificate from the players and manager of Liverpool FC, wishing Rabbi Lerer (a lifelong Liverpool supporter)  good luck in his new position.

The evening ended with a rousing rendition of You Will Never Walk alone.
On Sunday afternoon the Shul was transformed from the desert island to an English country fete for a traditional afternoon tea for 150 members.  The children’s choir led by Serena Kurash sang a reworked song entitled ‘Thank you to the Lerers’. They were then presented with the lyrics of the song and a book of memories and good wishes from the Shul members.

Rabbi & Naomi Lerer both moved by the love and affection commented what a special community Barnet it is and how much they would miss it. They added that over the twelve and a half years it had become like family to them.