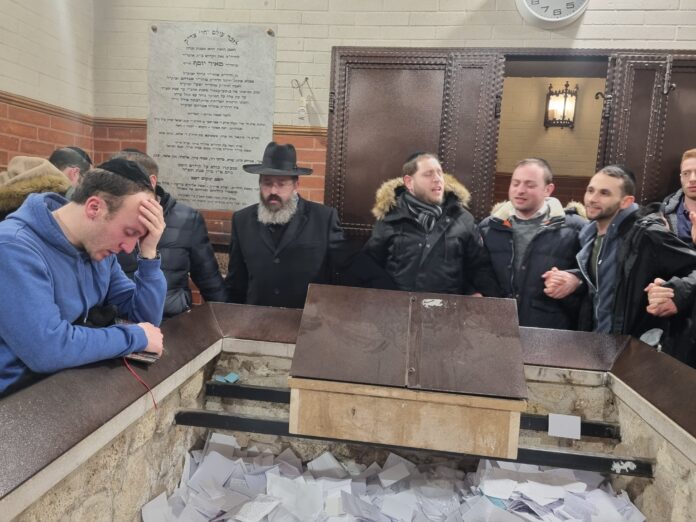 Over twenty five members of the Beis Yisroel Shul of Manchester went on trip to Kivrei Tzaddikim in Hungry together with the Shul Rov, Rabbi Yehoshua Ahron Sofer shlita. The trip started very early Sunday morning, first going to the Kever of Rav Yitzchok Eizek of Kalev zt’’l who was the mara d’asara of Kalev and the surrounding outlying villages. Rabbi Sofer gave a shiur on the halachos and Hashkofa of davening at graves of Tzaddikim. Before every Kever, the Rov spoke about the accomplishments of the Tzaddik with many stories and lessons to be learnt from the Tzaddikim.

After Kaliv, they went to Mad and visited the magnificent and beautiful shul of Mad where they davened Mincha. The Rov gave a drosho in the Mad shul, saying over a drosho from the Kol Aryeh, Rav Avrohom Yehuda Schwartz zt’’l who was the Rov of Mad in 1881. Tefillos were said at the kever of the Kol Aryeh and also at the kever of the Levushe Mordechai, Rav Mordechai Leib Winkler zt’’l who was the Rov in Mad in 1902. Rav Winkler wrote the response Levushe Mordechai, which contains 1550 separate response addressed to 174 different locations, testifying to his popularity and importance as a posek.

Sunday evening, supper was served at the Shul of Reb Shayele Kerestir with a lot of singing in preparation of going to the Kever. There were heartfelt Tefillos said at the Kever of Reb Shayele followed by moving songs.

Afterwards, they travelled back to Budapest where they davened at the Kever of Rav Shimon Oppenheim zt’’l who was the Rov of Budapest in 1801 and served as a Rov for 50 years, he was nifter at the age of 100 years old.

The last stop was at the shoes along the Danube River, where the Rov asked everyone to take their shoes off and feel the freezing cold ground, imagining they were standing along the river facing the Arrow – Cross Hungarian thugs. There are men’s shoes, women’s shoes, adult shoes with children’s shoes, fancy dress shoes and workerman’s boots all along the river, symbolising there was no differentiation amongst the victims. The Danube River is a mass grave of thousands of Yidden. The Rov said a special keil molei rachamim with Kaddish in memory of the Kedoshim killed in the river.

The trip was successfully arranged by Yehuda Fagleman and very much enjoyed by all the participants. A truly most inspiring and uplifting well spent few days.