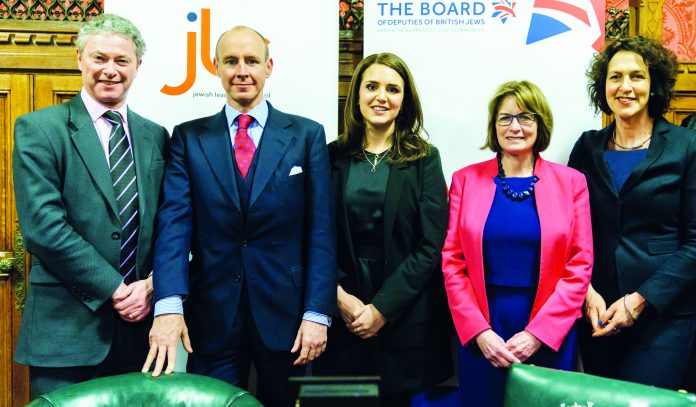 The Board of Deputies and Jewish Leadership Council launched a paper outlining how Brexit might impact on the Jewish community on Monday.
Daniel Hannan MEP and Louise Ellman MP discussed a range of issues with Sky broadcaster Sandy Rashty at a packed event in the Houses of Parliament.
“The EU is based around the idea that the nation state is arbitrary, transient and discredited,” said
Mr Hannan.
“ I can’t think of a stronger vindication of the desire of people to form their own state than the story of Israel.”
Ellman added: “The important work the EU has done has helped us to address antisemitism and may provide protection on issues such as Shechita.”
The paper asks for assurances that financial sanctions are not lifted on anti-Semitic terror groups after we leave the European Union.
Brexit can also be seen as an opportunity to look at proscribing Hezbollah in its entirety.
Other areas the report covers are trade with Israel and issues concerning kosher meat.
“Since the EU referendum, there has been a great deal of uncertainty around Britain’s future,” said Gillian Merron, BoD.
“This Paper clarifies how leaving the European Union could affect the Jewish community and sets out our position regarding key areas of Jewish life.
“We hope that it will both inform and shape the debate around the withdrawal process and ensure that the Jewish community is able to continue to thrive in the UK,” added Simon Johnson, JLC.
The All Party Parliamentary Group on British Jews hosted the event.