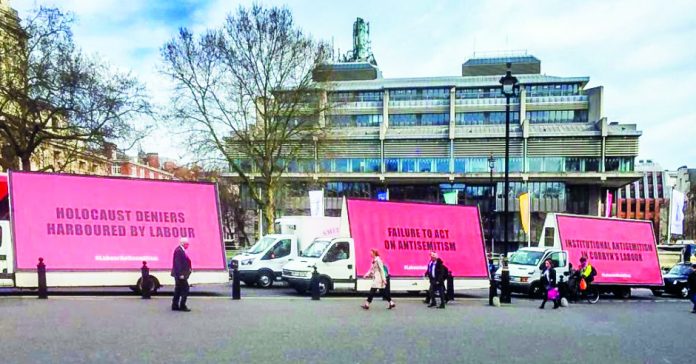 The Board of Deputies and Jewish Leadership Council have rebuffed an invitation to attend a “round table” event staged by the Labour Party next week.
The Labour initiative is set to take place 24 hours after a much-publicised meeting between the Board and JLC with leader Jeremy Corbyn on Tuesday, April 24.
The two representative bodies plan to discuss with Mr Corbyn, and new Labour general secretary Jennie Formby, a set of “specific actions, which we have already proposed and published, and which can help the Labour Party tackle its anti-Semitism problem.”
Following the meeting both
organisations will know whether Mr Corbyn and the Labour Party have committed to taking the necessary action needed against anti-Semitism.
Mr Corbyn’s announcement of a second meeting has riled both the Board and JLC as the Jewish Voice for Labour Group, which disputes their depiction of anti-Semitism in Labour, have been invited to attend.
JVL, aside from stating the Board and JLC are “weaponising” the topic to undermine Mr Corbyn’s leadership, staged a counter demonstration to the Enough is Enough rally last month.
Reaction from the two bodies has been swift.
In a statement the Board and the JLC say the second meeting has no agenda and have urged Jewish communal organisations to focus on Mr Corbyn and Ms Formby’s response to the April 24 meeting.
After the Enough is Enough rally, Mr Corbyn apologised for the hurt caused by anti-Semitism in the party.
Writing in the Guardian last Sunday about the proposed April 24 meeting, Board President Jonathan Arkush and JLC chair Jonathan Goldstein described last month’s rally as a “necessary moment of catharsis, as painful for Labour as it was for our community, but we cannot now return to “business as usual.”
They concluded: “We need this to be a genuine turning point and will do everything we can to make it so. We can achieve this together if Corbyn can fulfil his pledge to be our “militant ally” in the fight against anti-Semitism and demonstrate his understanding that what is now needed is firm action and not just words.”
Mr Corbyn has agreed to an agenda set out by the Board and JLC, including a proposal on disciplinary cases to be concluded by a set time among other issues.
Time will tell if progress on the ant-Semitism issue encircling the Labour Party can be made.
It certainly cannot have been helped by a billboard protest outside the Labour Party headquarters on Victoria Street in London on Tuesday.
Organised by the Community United against Labour Party anti-Semitism (Culpa), which raised over £4,500 from a crowd-funding campaign, the billboards read “Holocaust deniers harboured by Labour”, “Failure to act on anti-Semitism”, and “Institutional anti-Semitism in Corbyn’s Labour”.
Culpa spokesperson Jonathan Hoffman said: “This is a grassroots action borne of intense frustration at the lack of action by Jeremy Corbyn.
“There is no indication that he takes anti-Semitism seriously. No recognition that for Jews anti-Semitism is not just a matter of bad behaviour, it is a matter of survival.
“If he is unwilling or unable to deliver on the fight against anti-Semitism, then Labour must find someone who can.”
Mr Hoffman noted that a group of Labour members and ex members was behind the idea funded by individuals from different religious backgrounds and political beliefs.
The billboards were pictured outside the Houses of Parliament on the day Parliament debated anti-Semitism.
And the ads were driven along other notable areas including Westminster Bridge, Lambeth Bridge, Whitehall, Strand and Waterloo Bridge.
The protest was inspired by Oscar-winning film ‘Three billboards outside Ebbing, Missouri’.