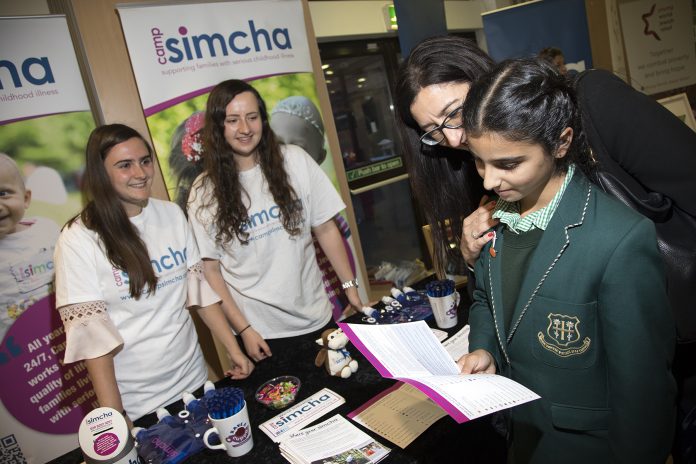 More than 150 people from around Hertfordshire flocked to Bushey Synagogue to attend a unique event to encourage children and young teenagers to get involved in charitable causes.
In the first ever fair of its kind, parents from Watford, Borehamwood, Stanmore and Bushey came with their children who are approaching Batmitzvah and Barmitzvah age to speak to a whole host of different charities, including Camp Simcha and World Jewish Relief.
Throughout the evening they had the opportunity to meet with 15 charities who all explained their twinning programmes, sponsorship ideas and ways the children could make their Barmitzvah and Batmitzvah celebrations more meaningful for themselves and others.
12 year old Tom Shooter said “I wanted to do something to help others in my Barmitzvah year but had no idea about where to start. The charity fair gave me so many ideas and I’ve got some great choices now.”
With simcha music playing, and canapes and sushi also served, the atmosphere in Bushey Synagogue was buzzing as the children had fun going around all the different stalls.
Sharonne Durkin from Beit Halochem, a charity which helps rehabilitation of wounded soldiers in Israel said, “It was a wonderful initiative and a unique opportunity to see such important causes coming together in Bushey Shul to help inspire the next generation.”
The Rabbi of Bushey Synagogue, Rabbi Elchonon Feldman, said “this was a fantastic event for those who are entering such an important part of their lives, becoming young adults, and they start to see what a huge difference they can make to others. It was amazing to see so many wanting to do so much.”
Rabbi Elchonon also took the opportunity to introduce Bushey’s newly-appointed Assistant Rabbinical team Rabbi Nick and his wife Shira. They have moved from Hale, South Manchester where they have been working with young families and youth.