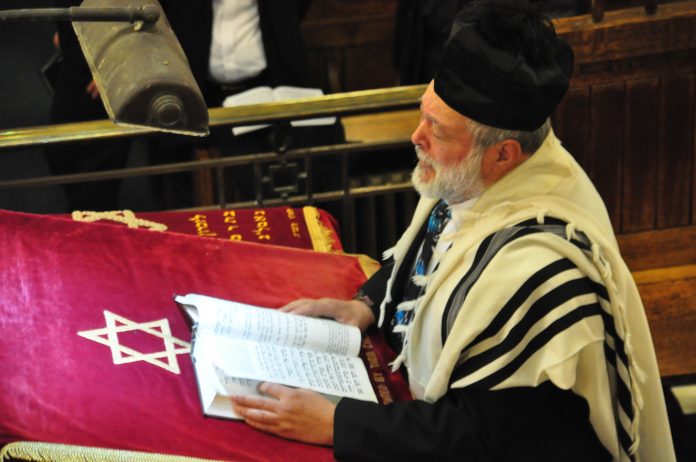 Over 500 people attended a special Cantorial Sefirat Ha’omer tribute evening at Higher Crumpsall and Higher Broughton Synagogue in memory of Chazan Avraham Hillman, who passed away recently after almost 50 years of service.

The cast was led by world famous Chazan Benjamin Muller, from Antwerp, together with his sons Chazan Yossi and Rafi Muller, with the Whitefield Shul choir, led by Mr Tim Dempsey and members of the Manchester Jewish Male Voice Choir.

Chazan Hillman was born in Frankfurt, where he was forced to flee Nazi persecution and go to Israel. At the tender age of 9, he was already a soloist at the Great Synagogue in Haifa, earning himself the title ‘Wunderkind.’

Rabbi Arnold Saunders, who worked alongside Avrom, as he was affectionately called, for over 25 years, recalls fondly how he was both a great Chazan and a great man. “ He was a wonderful Chazan of the old school variety, effortlessly combining complete mastery of chazanut, together with a meaningful interpretation of each tefillah he sang.”

“In addition, the 34 years that he volunteered as Jewish Chaplain for North Manchester General Hospital, saw him visiting patients on an almost daily basis, and he rightly became extremely popular with both patients and staff alike.” He was a Kohen, and people truly felt blessed when he had visited them.”

Alex Klyne, a close friend of Avrom for many years, and heavily involved in the Music business himself, remembers how he was one of the only Chazanim that could “improvise on the spot.”  According to Alex, “when Chazan Hillman was in his heyday, the richness and power in his voice, was virtually unrivalled.” He had the opportunity to go “anywhere in the world,” but he always stayed loyal to Crumpsall shul, turning down “many prestigious posts around the world.”

One member admitted that during Nesaneh Tokef, when Avrom was in full-flow, it made the very made the hairs on the back of his neck stand up.

Chazan Hillman is survived by his wife Yocheved, five children, nine grandchildren and one great grandchild.