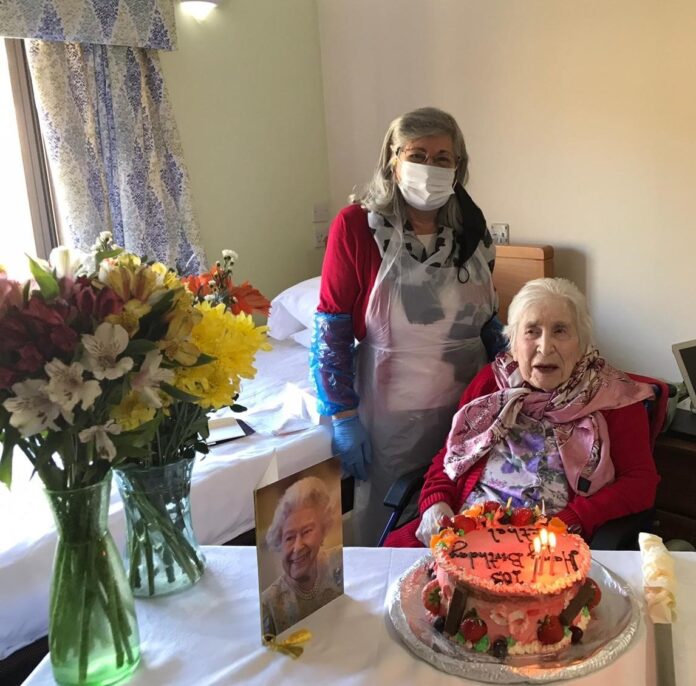 Ethel Fedor celebrated her 105th birthday with cards and gifts including a birthday card from The Queen and a visit from her daughter, Rosalind Jackson. The centenarian enjoyed a birthday Zoom with her 20 close family members across four generations, with the youngest great-grandchild, Alfie who is 100 years her junior. Ethel had cake and candles with the carer staff at Jewish Care’s Lady Sarah Cohen House where she has been a resident for 2.5 years, since she was 103.

Ethel was delighted to receive another card from The Queen and said to her family on the Zoom “I don’t know anyone who’s reached 105 – so it seems like I’ve achieved something! It’s lovely to hear from you all and celebrate with our lovely big family.”

Born in Shoreditch on 5th April 1916, Ethel still loves a game of cards, concerts and entertainment, especially the 1940’s style music. Ethel lived in North Finchley for 26 years and before that in Islington.  Talking about her life in an interview for her 103rd birthday, Ethel said, “I wanted to be a writer when I was younger but it wasn’t really possible for a poor young woman from the East End so I left school young to work, like a lot of my generation.  That’s how it was. After leaving school young, I worked hard as an invisible mender at my aunt’s establishment in Cannon Street. After the War I learnt to audio type at night school and worked as a temp for many years, including legal secretarial work.

Ethel and her husband, Percy, met through their shared interest in cycling. She explained, “When I was younger, my brother and I were members of the Clarion Cycling Club, who had groups all over London. My brother sold Percy a bike and that’s how we met. He was in the club too and cycled all over the world. We soon married and used to go on cycling holidays together. Percy and I were married for 43 years and had many happy years together.”

Their joint interest in cycling took them to Europe just before World War II broke out. Ethel says, “I can remember just before war broke out we went to cycle in the Black Forest in Belgium. We stayed at a hostel for cyclists and walkers. It was a strange time to be in that part of Europe. Everyone at the hostel sang their national songs and when we came across the Germany-Luxembourg border we swiftly turned around. In England, things weren’t good at that time either. I can remember the fascists in Cable Street very clearly, though I didn’t get involved.”

Percy served in the Royal Electrical and Mechanical Engineers in Egypt, Al Kabeer and Ethel was evacuated to Letchworth to escape the Blitz. There she has her eldest daughter, Diane, in 1941. Remembering that time, she says, “All the relatives from London used to come and stay whenever they could get away from London and the bombing. It was an open house and a very welcome haven for them.”

After the war, Ethel and Percy returned to London’s East End to be in a Jewish environment and had their second daughter, Rosalind until they moved to a larger flat in Highbury in the early 50’s.