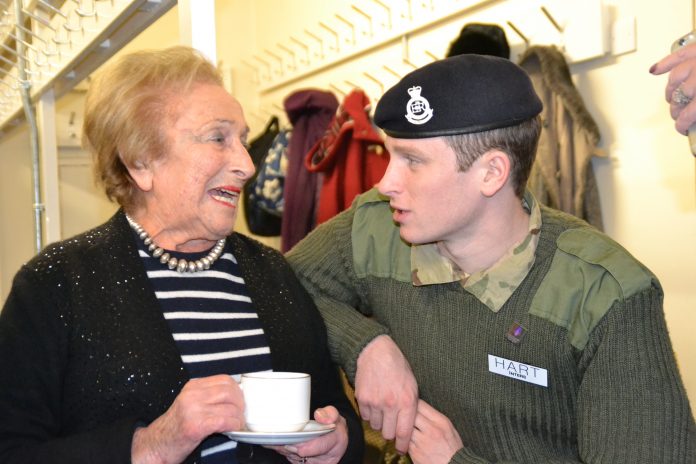 Cadets at the Royal Military Academy of Sandhurst welcomed survivors of the Holocaust to a ceremony held ahead of Holocaust Memorial Day (HMD) 2018.
On 4 December, members of Jewish Care’s Holocaust Survivors’ Centre lit candles of remembrance with cadets to remember the millions of people murdered during the Holocaust ahead of the UK’s annual Holocaust Memorial Day on 27 January 2018.
The Ceremony was organised in partnership with the Holocaust Memorial Day Trust – the UK charity that supports thousands local activities for HMD every year.
Zigi Shipper BEM who was deported as a child to Auschwitz-Birkenau and then sent to work at Stutthof concentration camp, addressed the cadets. He said: ‘If I live 1000 years I will never understand how they did what they did to so many millions of people. But you must never, never hate. If you do you’ll hate everybody, including yourself and you’ll have no life.
‘I can never thank the British Army enough for what they did for me at the time of liberation and for all of us. They saved my life and I’m very proud to be British.’
The ceremony included filmed testimony from Kemal Pervanić, a survivor of the genocide in Bosnia, poetry reflecting on the genocides in Rwanda and Cambodia, as well as information from the Holocaust Memorial Day Trust on the ‘ten stages of genocide’.
Lieutenant Colonel Whitelegge said: ‘It’s easy for us to disassociate ourselves from the past and say it was them not us, but that’s too easy, we need to understand how genocide happens.’
Holocaust Memorial Day is the day to remember the millions of people who were murdered and had their lives changed forever in the Holocaust, under Nazi Persecution and in subsequent genocides in Cambodia, Rwanda, Bosnia and Darfur.
The ceremony at Sandhurst was attended by approximately 250 cadets and was timed to coincide with the end of the cadets’ training.
Olivia Marks-Woldman, Chief Executive of the Holocaust Memorial Day Trust said: ‘This event was a great partnership between Sandhurst Military Academy, the Holocaust Memorial Day Trust and Jewish Care’s Holocaust Survivors’ Centre.
‘The cadets at this ceremony are the future leaders of the British Army. It is particularly important for them to mark HMD and we were delighted to support this event.’
Aviva Trup, manager of Jewish Care’s Holocaust Survivors’ Centre, where survivors can meet, socialise and benefit from a cultural and therapeutic programme, said: ‘Today was an opportunity for survivors to thank the British Army and for the Sandhurst cadets to understand just a little how it feels to be liberated and their impact, as well as their responsibilities, to those they strive to protect.’
Mala Tribich MBE, a survivor of the Holocaust, who attended the event, said: ‘You follow in the footsteps of men of great valour, who in many cases must have seen such tragic sights, yet carried out their duties in those camps they liberated with compassion and such heartfelt feelings.
’As a survivor of Belsen I cannot find words to express my gratitude for what they did.’
After the ceremony, survivors and cadets had lunch together, then the survivors were taken on a tour of Sandhurst.
Following the visit, Holocaust survivor Ivor Perl BEM said: “I felt so honoured to be invited to Sandhurst. I felt the cadets really wanted to hear our story and genuinely cared. Those young people who are graduating from the Royal Military Academy are exactly who should be told as they have the opportunity to change world history.”
Holocaust Memorial Day takes place on 27 January each year. Last year more than 7,700 local activities took place across the UK in diverse settings such as libraries, schools, workplaces, community centres, faith groups, prisons and many more.
The theme for HMD 2018 is The Power of Words and activities around the country will be exploring how language has been used in the past, and how it is used in the present day.
For more information about Holocaust Memorial Day, or to find out how you can get involved, please visit hmd.org.uk