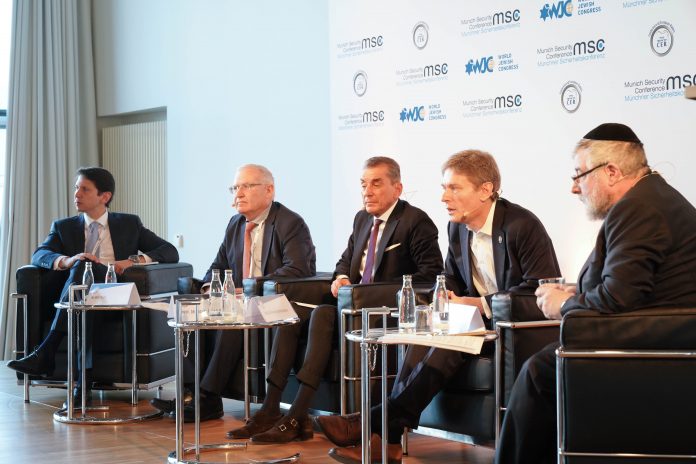 Sunday 17th February 2019: Chief Rabbi Pinchas Goldschmidt, President of the Conference of European Rabbis, hosted a high-level panel discussion this morning titled ‘Should Jews stay or leave? When antisemitism turns to lethal terror: how to secure Jewish communities around the world’.

The panel was chaired by Chief Rabbi Goldschmidt and focused on the steep rise in the spread of antisemitic incidents and how the language surrounding antisemitism has rapidly evolved. A key agenda point addressed how rhetoric from both the Left and Right has made the threat of terror more prevalent and real for the Jewish community than ever before. During the discussion, the panel explored the changing nature of hate crime and subsequent threats posed against the global Jewish community. The speakers concluded that authorities in every country must stand up for pluralism and lead the fight against rampant antisemitism.

Speaking to the Munich Security Conference, Chief Rabbi Goldschmidt said: ‘Jewish communities around the world are facing the same problem: that antisemitism is getting worse. Governments and societies around the world must take action to guarantee security for its minorities.’

Professor Michel Friedman, lawyer and former Christian Democratic Union (CDU) politician, went further in saying that we are ‘facing a political crisis of European leadership, accepting the rise of antisemitic movements and far-right parties such as Alternative für Deutschland (AfD)’, before concluding that ‘we need a change in our political culture to tackle these concerning developments’.

Commenting on the US situation, Tom Malinowski, US Congressman and member of the Democratic Party, said: ‘American society too is becoming much more aware that minorities are under attack’ and that one of the prime reasons for the rise in antisemitism is because ‘politics is currently very divisive’.