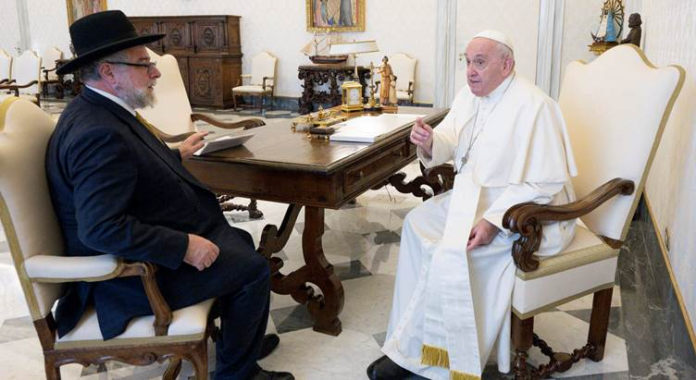 Last Sunday evening, a private meeting was held in Rome between Pope Francis and Chief Rabbi Pinchas Goldschmidt, the former Chief Rabbi of Moscow and the President of the Conference of European Rabbis (CER). They spoke about the Russia-Ukraine War as well as the Jewish religious freedoms issues facing the continent today, both pressing issues.

Chief Rabbi Goldschmidt also spoke about the problem of Jewish religious rights on the continent. As background, he explained that key Jewish practices, such as Shechita, which are vital for Jewish life, are not explicitly safeguarded by law, operating instead as a derogation. Many countries, pressured under the pretense of animal welfare, can and do ban Kosher meat production. Chief Rabbi Goldschmidt spoke to the Pope of the need to have clear legislation protecting Shechita and other Jewish religious practices.

Chief Rabbi Pinchas Goldschmidt remarked, “It is an honor to continue voicing the concerns of the Jewish communities of Europe before Pope Francis, who received me with such a warm welcome. I believe religious leaders must proclaim what they believe is right, morally and for their followers, however outspoken these messages may be. For decades and especially since Russia’s invasion of Ukraine, I have done this.”