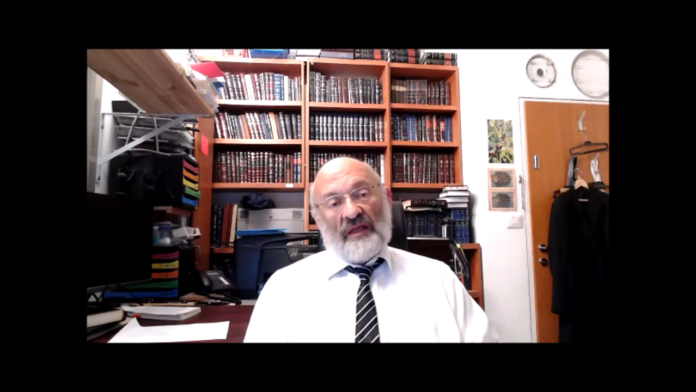 The first cycle of high-level training delivered by the Conference of European Rabbis (CER) as part of its “Rabbinical Reserve of Europe” programme has come to an end: 38 young rabbis from 19 countries have now received the formal training addressing many of the challenges facing Jewish communities around the world today.

Over a period of two years, the rabbis learnt about a range of issues, including the inspection of mikvahs, the supervision of factories and restaurants in accordance with kashrut laws and how community leaders can help combat the rise of antisemitism, amongst other prevalent topics. The rabbis also received professional training focusing on skills such as communication, leadership, fundraising and public speaking.

During the ceremony, three of the rabbis received prizes for their contributions to the communal life: Rabbi Avinoam Citron, Rabbi of Liverpool, UK, Rabbi Daniel Brezner, Rabbi of Minsk, Belarus and Rabbi Daniel Ashkenazi, Rabbi of Barcelona, Spain. Three other rabbis, Rabbi Nachum Zicherman of Moscow, Russia, Rabbi David Basok of Wroclaw, Poland and Rabbi Eliyahu Krivoshi from the Torat Chaim yeshiva in Moscow, were presented with commendations in recognition of their diligence and commitment to their communities.

Commenting on the success of the programme, Chief Rabbi Pinchas Goldschmidt said: “These rabbis are the next generation of leaders and we have a duty to train them. The challenges facing the Jewish communities of Europe, and indeed the whole world, are huge. Assimilation is very high and the rabbis of our communities are the spearhead and focal point of Jewish life. We need to give them the practical tools needed to succeed in their work.”

In 2019, the CER established its “Rabbinical Reserve of Europe” programme to empower the next generation of communal leaders and to equip them with the tools to oversee the provision of halakhah throughout Europe. The programme attracted young rabbinical talent from all over the world, including Spain, Switzerland, Russia, France, Poland, Belarus, Latvia, Moldova, Sweden, Bulgaria, Poland, Romania, Austria, Georgia, Ukraine, Estonia and the UK.

The programme was developed by Rabbi Lebel and the CER’s chief executive, Gady Gronich, in affiliation with the Patrick and Lina Drahi Foundation, the Pilgens Foundation, Ms Joel Aflalo, one of the leaders of the Matanel, and the CER’s secretary, Rabbi Aharon Shmuel Baskin, who co-ordinated the programme.