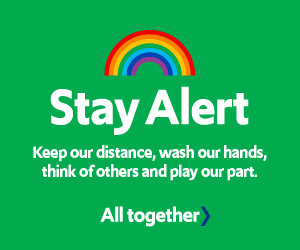 Israel has had 969 fatalities since the start of the coronavirus pandemic.

The Health Ministry according to latest data has now notified 969 deaths, 619 people passed away in July and August illustrating a second wave spike.

While the government continues the ongoing battle against the pandemic, over 2.4 million youngsters returned to school though thousands are working remotely due to ongoing outbreak measures.

School/remote classes are expected to continue throughout the 2020/21 academic year.

Some 140,000 pupils from 23 cities or towns in ‘red areas’ are at home as schools are currently shut due to high infection rates. Schools in six neighbourhoods are closed due to logistical disputes.

Parents must fill in a declaration form for children in primary (grades 1-6) and intermediate schools (grades 7-9) before they can return. Secondary school pupils (grades 10-12) can self-declare health.

Kindergartens, first and second grade children are in school through the week. Other year groups of 18 pupils rotate between classes remotely and in school.

The return to school is hotly debated in Israel with ‘red’ towns and cities central to discussions.

Gamzu’s ‘traffic light’ plan splits the country into 250 local and regional councils. ‘Green’ is low morbidity, ‘red’ is a high rate of infection. ‘Orange’ and ‘yellow’ denotes in mid-range infections.

Gatherings indoors and outside increases the lower the morbidity rate.

Local government is assisted by the IDF Home Front Command.

In related news, around 800 yeshiva students reportedly tested positive for coronavirus this week.

Gamzu lambasted Charedi leader Rabbi Chaim Kanievsky for calling on yeshiva heads not to test students for the deadly virus.

Gamzu added that without health regulations and testing a nationwide lockdown may result.

“We are standing at an infection rate of 14% and the responsibility for this is in your hands,” he reportedly said. “We need the full cooperation of municipal authorities and its leaders, and I am sure the residents will follow all rules and regulations. A quick return to normalcy is only up to you, through adherence to regulations, to keep you and your families safe.”

Kanievsky’s comments, reportedly verified by colleagues, came on the back of concerns about hundreds of corona cases at unsupervised private yeshivas. There have also been reports of hundreds of students and staff at Rina Shel Torah yeshiva in Karmiel testing positive last weekend.

The yeshiva and local homes are under lockdown as they are near an elderly population.

Residents claim there is little contact with students but the Home Front Command and Health Ministry have made a judgement call.

Meantime, there is a concern the healthcare system will struggle to cope in coming months.

Keren Shechter-Azulay, General Director, Maccabi Healthcare Services, reportedly noted, “September is going to be a crucial month, a period filled with holidays, prayer sessions in synagogues and family meetings. After that, the usual wave of winter sickness and schools will start influencing the number of virus patients.”

Prof. Leonid Eidelman, former World Medical Association head, reportedly added, “This is a severe illness that people die from and we must be prepared against it accordingly. Some of the patients currently in serious condition will die. It is important to not get infected and not infect other people.”

He added, “Healthcare providers are doing a very important job. Many coronavirus patients received homecare, recovered from the illness and were able to return to work healthy.”

With the High Holidays just two weeks away, a nation-wide lockdown is still being considered.

Health Minister Yuli Edelstein has called on Israelis not to hold large family meals due to spikes.

Speaking at an inauguration ceremony of the Coronavirus Control Center recently, Edelstein said the Israeli public had a responsibility “to hold back”.

“This year our responsibility is not to gather in large families around the holiday table,” he noted. “If we all act responsibly and obey the guidelines issued by the Health Ministry, I am confident that we can overcome the unknown. We will emerge victorious without harming the delicate fabric of life in Israel, the needs of society and economy.”

“It’s not certain that all politicians and MKs understand what we are doing here and what path we have taken,” he explained. “The whole world is now saying, ‘maybe we will run it (the second wave) without closures’. It has a price, it’s complex.”

He added. “The easy but destructive way is to close everything, economy, education, all systems of life for five to three weeks. The second method is difficult, complex and complicated, but it is constructive.

“In the second wave, the State of Israel decided to take the hard way, and I believe that is the way.”

Technicians will however service intensive care units and urgent tests for emergency rooms’ patients. Coronavirus testing will continue, those with negative tests will not be informed. This latter move affects foreign travel as Israelis are required to present a negative test 24 hours before flying.