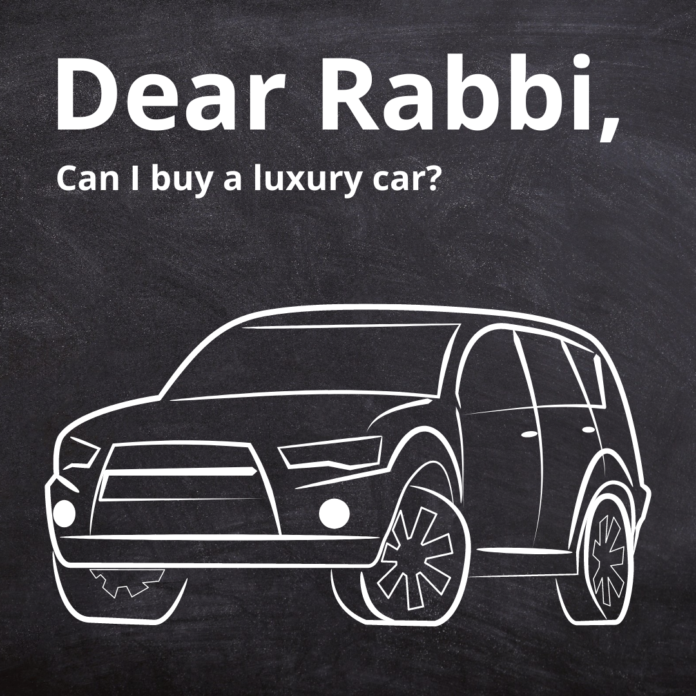 I live as a member in a particularly Orthodox Jewish community. I recently bought a nice luxury car and all I get now is funny looks from everyone as though to say, “Who do you think you are?” I suppose my question is, is there a Halachic position on spending money on a luxury car?

When the Torah (Vayikra 14:36) instructs that a house struck with leprosy be cleared out before a Cohen renders it impure, the commentator Rashi makes the point that “the Torah takes pity on a Jew’s resources.” Similarly, when the verse (Devarim 14:21) states that the carcass of a forbidden animal can be sold to a non-Jew, the Midrash notes, “the Torah takes pity on a Jew’s resources.” This is a recurring theme throughout Jewish literature. Thus begging the question, if the Torah encourages conservation, wherein would lie the justification to spend excess money on a luxury car?

Even if it is well within the means of an individual, the Talmud (Rosh Hashanah 27a) observes that the mouthpiece of the Shofar used on fast days was covered with silver rather than gold because “the Torah takes pity on Jewish resources.” The Temple could certainly have afforded the gold, yet still avoided unnecessary excess.

To be sure, if it is somehow necessary for the purposes of work or whatever other reason, then so be it. Moreover, the Torah doesn’t forbid one from taking pleasure in what they can afford. But generally, when it’s just about feeling like king of the road, a balance ought to be struck between driving in comfort and spending the extra 50K just to impress the morning minyan. Give the money to charity instead. You’re guaranteed a more luxurious place in G-d’s books.

When someone has done time in prison and then seeks to come back to synagogue, should he be welcomed back in? What about when he has a yartzeit, in order to say kaddish?

It really very much depends on the nature of the crime. For example, if he was in for paedophilia, then there is a very real element of risk, especially when there are children around. Moreover, those with children would not be comfortable bringing their kids to shul in the circumstances. Perhaps, some leniency ought to be sought for the purposes of saying kaddish on a yartzeit, but safeguarding measures would have to be put into place before that could be allowed.

For other crimes, well, again, it depends. If the individual concerned stole from members of the community, while there isn’t the same risk per se, one has to be mindful of the sensitivities of those other members who attend shul, that were his victims.

We do believe in the principle of repentance and turning over a new leaf. But we are always mindful of the nature of the beast and have to take in the bigger picture.

I spent a lot of my earlier life involved in all sorts of decadent behaviour. Even as I now lead a more virtuous life, I find myself often thinking back with regret and it always drags me down. In fact only recently I was feeling so lousy about it all, that I found myself going down that same slippery slope. How do I snap out of it?

Foremost, you ought to pursue some professional help that can guide you through this process. But in the meantime, here is some food for thought: A Jew ends up sleeping in the same cabin as a Russian General of the Czar’s army. He tells the conductor to wake him up at 4:00 a.m. so he can get off at his stop. He is awakened at the proper time, yet due to the darkness he mistakenly puts on the clothes of the general instead of his own.

When he arrives home, his wife asks him if everything is all right with him. When he takes a look in the mirror and sees that he is wearing the general’s uniform, he tells his wife, “It seems like the conductor woke up the general instead of me.”

Though we may feel our personalities to be torn inside and harbouring within them dark and gloomy demons, we ought never allow ourselves to succumb to these forces and grant them permission to dictate our behaviour. We need to remember always that even while our conscious moods may gravitate toward decadence, our essence remains pure.

This is Judaism’s fundamental code of human behaviour. Even while you feel selfish, unholy and obnoxious inside, your behaviour – what you do, how you talk and how you think – ought to reflect the beauty and splendour of your innate holiness.