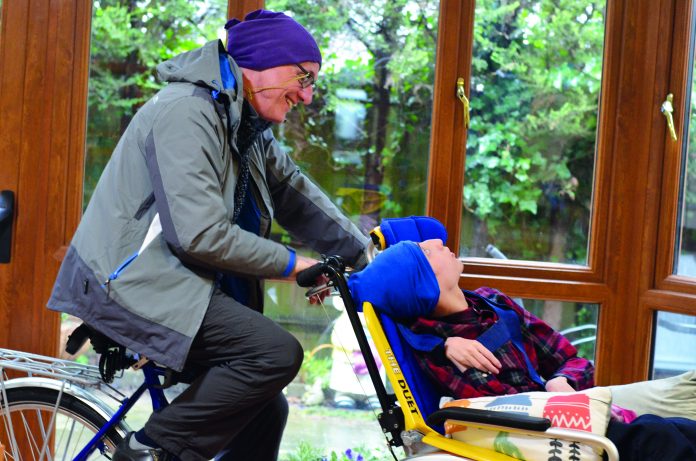 Devoted father Laurence Smith has begun training for a cycling challenge in Central Europe in June, when he will ride a specially-adapted bike with his disabled son Jeremy to raise money for Norwood.
Jeremy, who recently celebrated his 26th birthday at Norwood’s Woodcock Dell residence, where he lives, has cerebral palsy, scoliosis (curvature of the spine), epilepsy and profound learning disabilities.
For the Norwood Central Europe Cycling Challenge from 17th June, his father Laurence, 63, will be pushing him on a custom bike that has a connection to Jeremy’s chair. The three-day challenge will see the pair cycle more than 150 miles across a route that takes in Croatia, Slovenia, Austria and Hungary.
Laurence says he is taking on the challenge for a number of reasons, including raising funds “to make life easier for the carers at Norwood” and out of a determination that “Jeremy isn’t deprived of anything that his able-bodied peers can do”. But what he’s looking forward to most of all is simply the chance to spend time with his son.
“I haven’t really had a number of consecutive days concentrated like this where we do something that’s fun for some time,” said Laurence, who visits his son twice a week at his Norwood home. Laurence has long been aware of Jeremy’s love of the open road, so he’s hoping this summer will be extra-special
“I remember when Jeremy was 11 we went for a ride in Bracknell Forest,” he says. “I have a very vivid memory of going down this very long hill and we went whizzing down at a great speed. And he was looking up at me and laughing his head off. That’s when I realised that he loved cycling.”
This isn’t the first fundraising challenge Laurence has undertaken for Jeremy. In 2016 he trekked the GR 10 route in the Pyrenees, fulfilling a promise he made to Jeremy a decade before.
“In August 2006 we were in the Pyrenees for a family holiday with Jeremy,” Laurence explains. “We drove up to the mountains and found this forest track and Jeremy was in raptures; he loved it. I said to him ‘one day Jeremy I’ll walk the whole road for you’. And then 10 years exactly to the day I was stood at that exact spot having fulfilled my promise.”
Laurence is hoping to raise £6,800 through this challenge, and people can donate on: https://uk.virginmoneygiving.com/fundraiser-display/showROFundraiserPage?userUrl=LaurenceSmithTreks&pageUrl=3
Laurence also has a Facebook group where you can follow his progress, from the preparations to the ride itself, here:
www.facebook.com/groups/915633311949604/