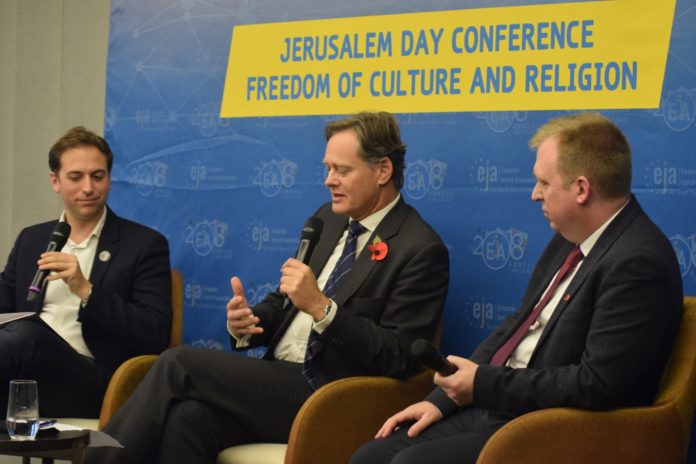 With EU politics polarising and deep concerns for their future amid growing anti-Semitism, European Jews meet in Brussels for a two-day flagship conference of the European Jewish Association.

‘’With Europe at a political crossroads and likely to polarise further away from the parties of the centre after the 2019 elections, the stakes have never been higher.’’

BRUSSELS—-How to counter growing antisemitism in Europe, how should Jews engage with non-mainstream political parties and with mainstream parties that become anti-Semitic like British Labour, ahead of the 2019 European elections, are among the main topics discussed and debated during the two-day flagship conference of the European Jewish Association (EJA) which opened Tuesday in Brussels.

Jewish community leaders, organisation chiefs, pro-Israel advocacy groups and activists meet in one of Europe’s largest Jewish gatherings which  also sees  senior European politicians, at ministerial and parliamentary level, MEPs, ambassadors, the EU’s Special Envoy on combatting anti-Semitism, as well as Israeli Ministry of Jerusalem and Heritage CEO address the over 200 attendees from Europe and Israel.

Opening the conference, Rabbi Menachem Margolin, Founder and Chairman of EJA, an umbrella group of Jewish organisations, said: “To see and hear so many Jews come together at this crucial time fills me with a mixture of hope and concern. I convened the conference so that Jews across the continent could openly discuss their concerns for European Jewry. With Europe at a political crossroads and likely to polarise further away from the parties of the centre after the 2019 elections, the stakes have never been higher, “

The resolution, among others, is expected to call on political leaders to sign up to the IHRA definition of antisemitism, to support the creation of a dedicated Special Envoy on anti-Semitism in  their respective countries, to reject BDS activities as ‘anti-Semitic’’ and to pledge support for the freedom of Jewish religious practices and traditions.

Rabbi Margolin stressed that ”Israel is the only life guarantee for Jews around the world. Jerusalem features freedom of religion. Europe should take Jerusalem as a model.” he said, deploring that some politicians declined to attend the conference because the issue of Jerusalem was discussed.

Today’s conference titled, Jerusalem Day Conference Freedom of Culture and Religion, heard Jewish representatives from several European countries outline the situation in their respective countries regarding the issue of antisemitism.

While a delegate from Serbia, Danilo Medic, mentioned that there is ”no organised antisemitism” in the country, Nina Tojzner, from the Jewish Youth Federation in Sweden, spoke of rising antisemitism which shifted to anti-Zionism, especially in the city of Malmo where almost all Jewish population has left.

Sacha Ghozlan, president of the Union of French Jewish students (UEJF) stressed the need to take action against social media platforms that spread hate speech, BDS, conspiracy theories and fake news. ‘Antisemitism is not only the problem of Jews but for the whole society.”

A special panel was dedicated to the ”very bad” situation in the UK where, as Gideon Falter, chairman of the Campaign Against Anti-Semitism put it, many Jews are considering leaving the country if Labour Jeremy Corbyn becomes Prime Minister. ”The Jewish community is very vulnerable, fearful and we need the help and support of other Jewish communities,” he said. ‘He noted that the Labour party refused to condemn the Pittsburgh shooting ”because this would mean to condemn anti-Semitism.”

Conservative MP Matthew James Offord said the situation in Labour would never happen in his own party. ”Corbyn has many followers who control the party. The situation will not change,” David Maddox, political editor at the Sunday Express, explained.

On Wednesday, the organisations such as the European March of the Living project, B’nei Brith Europe,  the Simon Wiesenthal Centre, the UK-based Campaign Against Anti-Semitism, Hungary’s EMIH and Holland’s IPOR, Europe Israel Public Affairs and Christians for Israel, as well as the French Consistoire and the Euro-Asian Jewish Congress will also hear and learn how Israel’s capital city is an example that Europe should adopt when it comes to underpinning, ensuring and protecting freedom of religion for all, in spite of ongoing European debates over its legal status.

”This conference should be the milestone for continuity of the Jewish life in Europe,” concluded Rabbi Margolin.