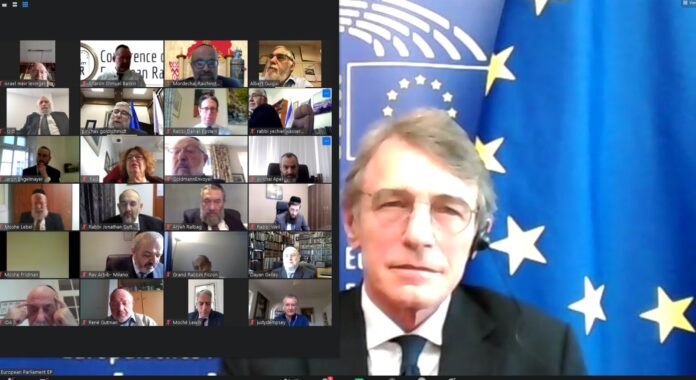 In his opening statement, President David Sassoli acknowledged “the devastating rise of terrorist attacks in many European nations”. However, he told the 50-strong group of the Chief Rabbis of all Europe’s leading communities that “we must remain united against religious discrimination” – a timely declaration with the EU having recently marked the seven-year anniversary of the adoption of its guidelines for the promotion and protection of freedom of religion or belief.

During the session, he went further to say: “We need to invest in greater equality and justice. Too many of our cities are stained with blood. These tragic events remind us once again that the health and economic crisis is not the only crisis that we need to address […] Every attack is an attack on our values. We need to work more for the safety of our Jewish communities. Feelings of discrimination against the Jewish people continues to linger on and this is totally unacceptable.” Mr Sassoli finished his speech by declaring: “The European Union must set an example to those who want to defy us. Freedom of religion is a founding value of Europe. The contribution of the Jewish people is the contribution to the greater good of Europe.”

Chief Rabbi Pinchas Goldschmidt, president of the Conference of European Rabbis, said: “Amidst the ongoing pandemic, the Standing Committee was unable to meet in person in a European capital as is tradition. However, we have worked to ensure that the most pressing issues affecting the Jewish communities of Europe are still duly scrutinised. The fundamental question revolved around how European governments and institutions can better protect Jewish communities in Europe, especially since the devastating attacks in Austria and France only recently. Coupled with the global health crisis, these are extremely testing times. The Conference of European Rabbis wants to instil a much-needed sense of security into the communities that we represent and ensure that they are able to carry out religious practices in a safe and free manner.”

Upon closing the session, Chief Rabbi Goldschmidt said: “We are grateful to President Sassoli for joining us. It is of vital importance to us that the President recognised the contribution of Jews to the European project. His declaration that there should not be minorities, just European citizens, resonates powerfully, as does his recognition that Jews are not part of the extremism agenda. The CER is proud to partner with the EU in ensuring the safety of European Jewry and we look forward to continuing to work closely with President Sassoli and the European Parliament to safeguard the European Union’s intrinsic values of human dignity, equality, freedom and human rights for all.”