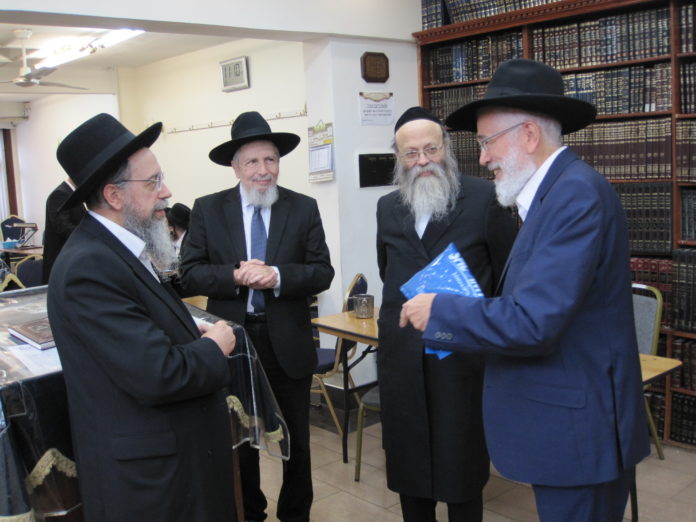 A nice gathering formed at the Biala Beis Midrash on Castlewood Road, South Tottenham to celebrate the fifteenth anniversary of Start Your Day the Torah Way – North London.

Rabbi Yitzchok Young Shlita, of the Tzanz Beis Midrash in Stamford Hill delivered the daily Shiur, during which he explained the deeper meaning of the Tekiyos and its ramifications (excuse the pun) on our day-to-day servitude to the Creator: the Teroo’oh symbolises fear, which should be mixed with joy – as represented in the triumphant blast of the Teki’oh.

This second part of the event was the annual report, presented by Rabbi Elimelech Levy, Rabbi of the Palmers Green and Southgate Synagogue.  In his detailed account, he enumerated the diverse range of topics that some of North London’s best speakers covered in this unique learning programme.  Rabbi Levy also highlighted the fact that unlike other Shiurim, TorahWay has been running uninterrupted throughout the pandemic, including Erev Pesach, Tishah beAv – when we had a live broadcast by Rabbi Pesach Krohn – all the way from his home in the United States.  He finished with a heartfelt thanks to the speakers, who have clocked up 4388 Shiurim on a voluntary basis.

The organisers took full advantage of the fact that today is Bank holiday in the UK, to celebrate this happy milestone, by adding another Shiur to the regular one. Rabbi Alexander Grossnas Shlita expounded on the theme of “sticking to your guns”, no matter what.  Using the dedicated TorahWay team as an example to follow, he elaborated on the merits of working on one’s goals – day in day out.

Menasche Scharf extended a heartfelt vote of thanks to Rabbi Moshe Glausiusz, the Gabbai of the Biala Beis Midrash, who has graciously lent his hand to TorahWay-North-London since its inception, as well as to Rabbi Moshe Margulies and Hechover Moshe Milner, who also read three chapters of Tehilim.