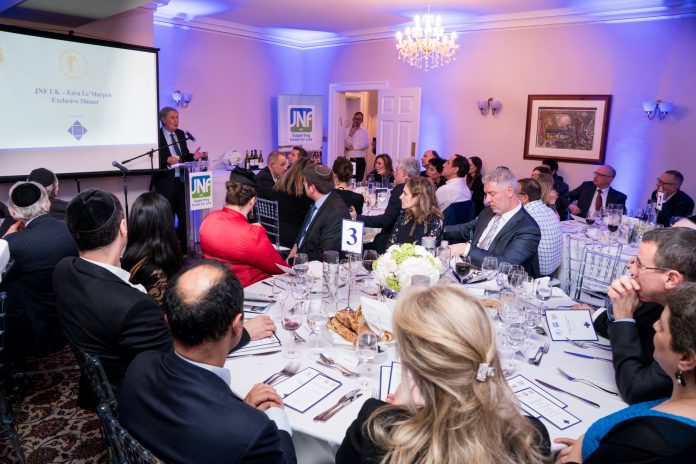 On 7 December at an exclusive dinner hosted by JNF UK in support of the JNF UK funded Ezra Le’Marpeh rehabilitation centre in Sderot. Those in attendance were enormously privileged to meet and hear from Ezra Le’Marpeh founder and Israel prize laureate Rabbi Avraham Elimelech Firer.

Tamir Pardo, the former Director of the Mossad serving from 2011 until 2016, also addressed JNF UK’s guests. In an engaging speech, Mr Pardo gave fascinating insights into modern day threats posed to national and international security by new technologies.
Rabbi Firer, who founded Ezra Le’Marpeh over 38 years ago and has worked tirelessly to alleviate the suffering of hundreds of thousands of people, was interviewed by His Excellency Ambassador Mark Regev. Guests at the dinner were able to hear from this inspirational leader how he developed a world-leading movement helping thousands of people.

The exclusive audience of supporters of Israel heard how Rabbi Firer has dedicated his life to carrying out tireless work on behalf of the sick and needy. As well as the Israel Prize, he has been awarded countless other honours, including the Knesset and the President’s prizes and several honorary PhDS.

The funds raised from this event will go towards the Medical Rehabilitation Centre in Sderot, on the border with the Gaza Strip. The centre is the only one of its kind in the Negev, benefitting approximately 500,000 people by providing life-changing care that otherwise would not be available to them.

Yonatan Galon, CEO of JNF UK, said “we are proud to be a partner in Rabbi Firer’s lifesaving mission and to have played a part in the construction of this important facility, including the Moss Jay Physiotherapy Suite, named after a JNF UK testator whose legacy made its creation possible. It was particularly gratifying to be in the presence of such an extraordinarily dedicated and generous group of supporters to hear more about the work of Rabbi Firer.”