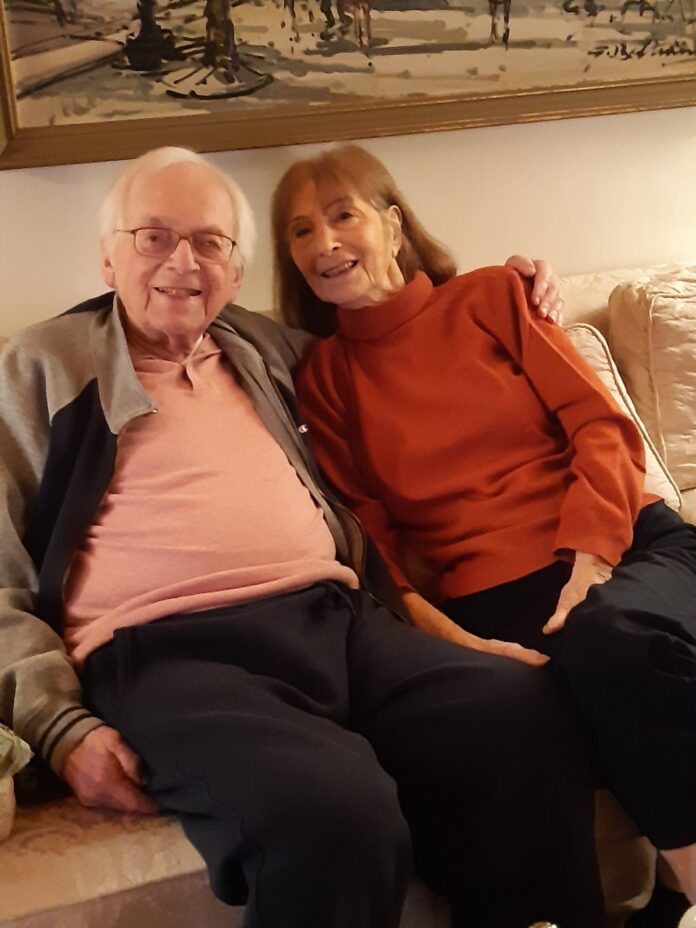 Last week, Freddie and Freda Knoller celebrated their platinum wedding anniversary on New Year’s Eve, marking 70 happy years together on a Zoom with members and volunteers of Jewish Care’s Holocaust Survivors’ Centre. Members of the Centre for many years, the couple joined the weekly virtual Yiddish group and staff shared one of Freddie and Freda’s favourite song, Sophie Milman’s, “Ochi Chernye”, with the volunteers and members.

Speaking on the Zoom, their daughter, Susie Knoller, said, “70 years is quite an achievement and they are very much in love. Thank you to everyone at the Holocaust Survivors’ Centre for celebrating this special day with my Mum and Dad. It’s been a lifeline to them after everything that’s happened and after everything the Centre has done for them over the years, it’s so important to them.

“They miss you all. You mean a lot to all of us and you always will.”

Freddie Knoller, BEM, is 99 years and 8 months young and will celebrate his 100th birthday on April 17th this year.

Survivors and volunteers gave their congratulations to the happy couple and wished Freddie and Freda a big Mazel tov. Eve Kugler, BEM said, “You’re an inspiration to everyone and to the hundreds of people you’ve told your story to and I wish you many good, happy years together.”

Freddie, responded to the group, saying, “We thank you all and thank Susie, for organising the celebration.”

Aviva Trup, Jewish Care’s Manager for Culture and Faith, added, “Freddie and Freda, you inspire us and we wish you a huge Mazeltov on your anniversary and many, many more happy years together.”

Talking about her parents, Susie Knoller said, “Freddie and Freda were married on 31st December 1950, in the Rabbi’s house in Baltimore, Maryland. They met after the war on a blind date. Freda, at that time was visiting her aunt and uncle in Baltimore, and Freddie, after being liberated from Bergen Belsen, was sent as a refugee to America, where his two brothers, Otto and Eric were living and happily married. Mum and Dad met on a blind date, after one month they were engaged and were married after 2 months. It was love at first sight!”

The couple moved back to England in 1952 after two years of marriage, as Freda, who is from the UK, was homesick. They have two children, Marcia, born in 1953 and Susie, born in 1956 who has Nadav, 24, who was born in Israel.

Freda and Freda shared their tips for a happy marriage. Freddie says, “Continued love. Love your partner, that’s all that matters” and Freda says, “One must marry the right person to begin with, and really love and respect each other”.

Freddie, born in Vienna, Austria in 1921, escaped the Nazi’s by fleeing to Belgium but was interned in a Belgian refugee camp until 1940. Freddie attempted to escape to France and was arrested on the border before escaping prison with false identification papers as a Frenchman from Alsace. He worked in Paris and joined the French Resistance before being betrayed by a French girlfriend and arrested again.

Refusing to reveal the name of the resistance group, Freddie admitted to being Jewish and was sent to the Drancy Transit Camp near Paris. He was deported, to Auschwitz where he carried 25kg cement bags at a run and survived due to his friendship with a French prisoner, a doctor, who helped him by sharing extra food with him.  He went on the Death March and was finally taken to by cattle truck to Bergen Belsen before being liberated by the British Army in March 1945. From there he made his way as a refugee to meet his family in America.

Freddie has shared his story, about the Holocaust through his talks and his books, helping to educate thousands of people and has raised a huge amount for Jewish Care’s Holocaust Survivors’ Centre which supports Holocaust survivors and refugees through a specific programme of social, cultural and therapeutic activities.