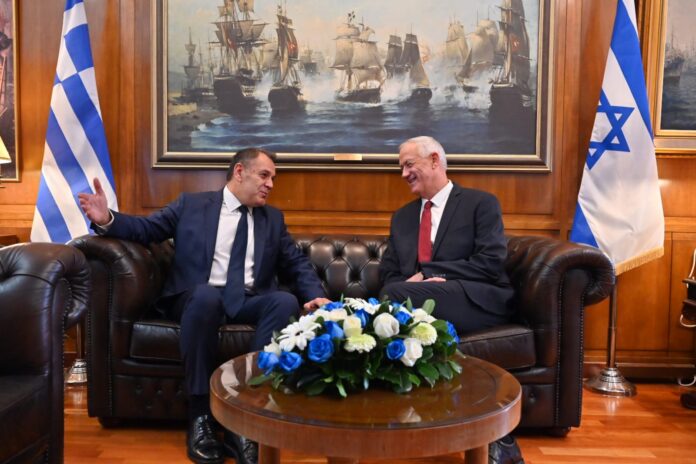 Defence Minister Benny Gantz has completed an official visit to the Hellenic Republic.

Israel’s minister met with Greek Minister of Defence Nikolaos Panagiotopoulosn and warned that “extremism and terrorism” impacting countries across the globe.

“The world is changing,” he explained. “The politics of extremism and terrorism impact countries across the globe. Iranian aggression continues to be a great threat to the region and the world.”

Gantz warned about Iran’s involvement in the Ukraine war and nuclear program.

“We see this in Iran’s support for terror proxies in Syria, Lebanon, Gaza, and Judea and Samaria,” he explained. “Just this week, an Iranian UAV was launched at a civilian vessel. It is critical to stop the spread of Iranian influence and ambitions.

“This is what Israel aims to achieve, through some of our activities under the CENTCOM umbrella, we will continue to operate against any attempt to build terror bases on our borders.”

Gantz added: “The global threats we see today are seeds for the challenges that will develop and grow in the future impacting national security, food supplies, immigration and energy resources.

Regarding bilateral ties with Greece, Gantz said that Greece was a “strategic partner.”

He observed: “Our ties are built on a foundation of trust and ongoing communication. We value both our bilateral ties, as well as the trilateral framework together with our partner, Cyprus.”

Over the past two years Israel’s defence cooperation has grown in military training, industrial projects and strategic dialogue.

“It has reached a new peak, with the official launch of the International Flight School in Kalamata,” said Gantz, who also spoke about regional opportunities.

“In the same way that we seek new ties and lean on our friends, Israel may act as a bridge in the East-Med region, in order to ensure peace and stability for all,” he explained.